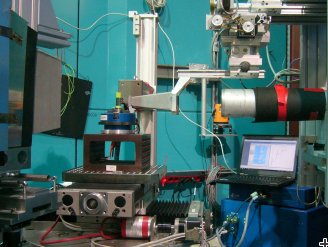 Lithium-ion batteries are seen as a solution for energy storage of the future and have become indispensible, especially in electromobility. Their key advantage is that they are able to store large amounts of energy but are still comparatively light and compact. However, when metallic lithium forms and deposits during charging it can lead to a reduced battery lifespan and even short-circuits. Scientists at the Technische Universität München (TUM) have now managed to peer into the inner workings of a battery without destroying it. In the process, they have resolved the so-called lithium plating mystery.

Mobile phones, digital cameras, camcorders, notebooks: They all run on lithium-ion batteries. These are characterized by high energy densities while remaining small and light enough to be used in portable devices. “A lithium-ion battery can store three to four times the energy of a comparably sized nickel-cadmium battery,” explains Dr. habil. Ralph Gilles, scientist at the Neutron Source Heinz Maier-Leibnitz (FRM II). Even temperature fluctuations and longer-term storage do not pose problems for lithium-ion batteries.

These advantages make lithium-ion batteries a key technology for electromobility. In the not too distant future, electric vehicles will be able to hold their own against liquid fuel-driven transport media – also with regard to the accessible distance. This will require powerful, safe and fast-charging batteries.

Lithium plating can cause short-circuits

However, one previously known, yet poorly understood phenomenon stands in the way of this goal: metallic lithium deposition or lithium plating, as it is called.
Simply put, energy storage in a lithium-ion battery works by the following principle: Both the positive electrode (cathode) and the negative electrode (anode) can bind lithium ions. During the charging process, the induced electrical field forces the ions to move from the cathode to the anode. When the battery is discharged, the lithium ions move back to the cathode, releasing energy in the process.

The cathode in lithium-ion batteries comprises a lithium metal oxide while the standard material for battery anodes is graphite (carbon) with a layered structure. During the charging process, the lithium ions are stored in these layers.

However, occasionally lithium ions form metallic lithium instead of intercalating into the anode, as desired. The lithium deposits onto the anode and is no longer fully available for the described process. The result is a drop in battery performance. In extreme cases this can even lead to short-circuits. In addition, metallic lithium is highly inflammable.

Hitherto, observing the precise mechanism at work during lithium plating has not been possible. When a battery is opened, explains Ralph Gilles, you only get a snapshot of its present state. Yet, the amount of metallic lithium changes permanently. Using neutron beams, the scientists Dr. Veronika Zinth at the Neutron Source Heinz Maier-Leibnitz (FRM II) and Christian von Lüders at the Department of Electrical Energy Storage Technology were able to observe in situ the processes inside of batteries without cutting them open.

“In contrast to other methods, with neutron diffraction we can make more precise statements about when and how strongly lithium plating takes place,” explains Veronika Zinth.

Using the material research diffractometer STRESS-SPEC at FRM II, the researchers installed a battery in the neutron beam while it was charging and discharging. The incident neutron beam is diffracted according to Bragg’s law and collected in a detector. Using these signals, the researchers were able to indirectly deduce how much metallic lithium had formed.

The study is part of the German Federal Ministry of Education and Research (BMBF) ExZellTUM (Exellence Center for Battery Cells) project. The ExZellTUM project is geared towards the development of new energy storage systems, as well as new manufacturing processes, forming strategies and test technologies for storage systems production. The project comprises four partners: the Department of Electrical Energy Storage Systems, the Department of Machine Tools and Industrial Management, the Department of Technical Electrochemistry and the Neutron Source Heinz Maier-Leibnitz.