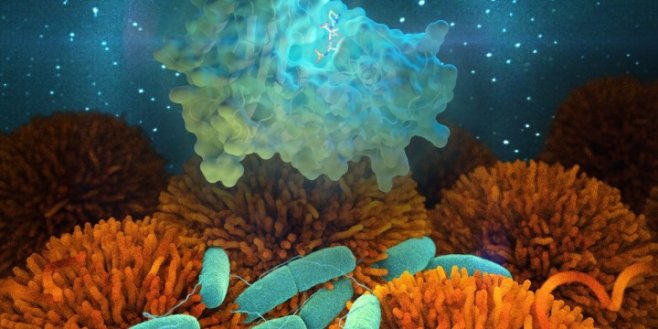 The discovery of penicillin almost 90 years ago ushered in the age of modern antibiotics, but the growth of antibiotic resistance means bacterial infections like pneumonia and tuberculosis are becoming more difficult to treat.

Researchers at the US Department of Energy’s (DOE’s) Oak Ridge National Laboratory (ORNL) are conducting a series of experiments at ORNL’s Spallation Neutron Source (SNS) to make sense of this phenomenon. Using the MaNDi instrument, SNS beamline 11B, they hope to better understand how bacteria containing enzymes called beta-lactamases resist the beta-lactam class of antibiotics. Any antibiotic containing a beta-lactam ring made up of organic compounds falls under this category.

“We are looking for answers on a fundamental science level,” said MaNDi instrument scientist Leighton Coates. “We have the machinery to explore these interactions using neutrons.”

With neutrons, the team can observe firsthand how beta-lactamases break down drug compounds without damaging the biological samples. Any insights gleaned from this process could help scientists and physicians detect and mitigate antibiotic resistance in the future.

In response, bacteria have evolved to counteract antibiotics in various ways, but producing beta-lactamases remains their most common and effective tactic. These enzymes serve as natural catalysts, breaking open the beta-lactam rings in antibiotics to deactivate their antibacterial properties.

Beta-lactam antibiotics are commonly prescribed because of their high specificity and low toxicity. However, as the number of antibiotics increases, so too does the number of resistant bacterial strains. Under these circumstances, even common respiratory tract and bloodstream infections can become dangerous.

Patients with existing health problems are more likely to contract bacterial infections and encounter resistant bacteria, but human behavior can contribute to antibiotic resistance in healthy individuals as well, such as when people take unnecessary or expired drugs.

As the perils of bacterial resistance continue to manifest in the emergence of incurable “superbugs” and the reemergence of various infectious diseases once thought under control if not eradicated, scientists are increasingly determined to investigate the contributing factors.

“We are studying not only how these antibiotics break down, but also how the bacteria are evolving to resist them,” Coates said.

The researchers are observing this process using capabilities at MaNDi.

“The large detector array on MaNDi, coupled with its high resolution, enables us to collect data over the course of a day or two, whereas on another instrument it would take much longer,” Coates explained.

Such information could help medical professionals and pharmaceutical companies tackle one of the most significant and wide-reaching threats to public health in the world today. The Centers for Disease Control and Prevention estimates that antibiotic resistance affects about 2 million people every year in the United States alone.

Researchers are developing new drugs that rely on substances called inhibitors to block beta-lactamases, but these methods are not infallible.

Bacteria have fleeting lifespans that allow natural selection to occur at a rapid pace. As a result, beta-lactamases can adapt to attack a new antibiotic shortly after the medication is developed, tested, and introduced. Medical researchers seek to stop, or at least slow, this constant cycle of resistance.

“When a new drug is introduced that the beta-lactamases can’t break down, bacteria quickly mutate and create new enzymes that will then attack the antibiotic,” said Patricia Langan, a postdoctoral researcher at SNS. “It’s a constant battle to stay ahead of them.”

To date, the team has studied how beta-lactamases break down antibiotics like aztreonam, penicillin, and cefotaxime.

“We’re going more in-depth into exactly what is happening on a chemical level, and hopefully, our research will help with future inhibitor design and drug development,” Langan said.

Their most significant discovery from this work involves demystifying the catalytic mechanism in beta-lactamases. They studied several key amino acids that help break down beta-lactam antibiotics and identified their roles in this biochemical reaction. By studying proton transfers within these amino acids, the researchers can uncover the inner workings of beta-lactamases.

“We’re finding all sorts of nuances,” Coates said. “By using neutrons, we can work out the protonation state of these important amino acids, and from there we can deduce what’s going on in the catalytic mechanism.”