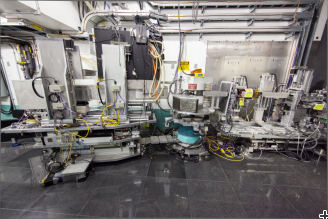 Carbon dioxide in the atmosphere may get the lion’s share of attention in climate change discussions, but the biggest repository of carbon is actually underfoot: soils store an estimated 2.5 trillion tons of carbon in the form of organic matter.

“The combined amount of carbon in vegetation and the atmosphere is only half of the carbon stored in soils,” said Melanie Mayes of ORNL’s Environmental Sciences Division. “How quickly that carbon moves in and out of soils is one of the big uncertainties in modeling the carbon cycle.”

With an eye on the big picture, Mayes and her colleagues are taking a closer look at soil carbon by studying nanoscale interactions between organic matter and minerals in soil. The team’s novel combination of neutron analysis and supercomputer simulations is providing experimental and theoretical data that challenge long-held assumptions in soil science.

“Our experiments are some of the first to interrogate the structure of layered organic matter−mineral interfaces, in part because there are only a limited number of techniques capable of studying these systems at a nanoscale resolution,” said ORNL’s Loukas Petridis.

The researchers first used neutron reflectometry at ORNL’s Spallation Neutron Source to analyze a representative soil system. Since this neutron technique is sensitive enough to detect nanoscale differences in organic composition, the researchers were able to verify the formation of layers.

The team then simulated the system using molecular dynamics, which revealed the fundamental driving forces behind the molecules’ layered formation. Using neutron reflectometry and supercomputer simulations in tandem was key to the project’s success, said Petridis.

Gaining insight into soil systems at such a fundamental level not only has implications for carbon cycle models, it could also affect scientists’ understanding of related ecosystems. Most models that scientists use to understand soil contamination or fertility, for instance, do not consider the possibility of layered organics residing on soil minerals.

“It changes the whole way we think about how carbon, nutrients and contaminants interact with soils, which therefore affects fertility, water quality and the terrestrial carbon cycle,” Petridis said.

The researchers hope to expand upon their initial research by further developing their experimental techniques and applying their analysis to a variety of soil systems.

“We have unique capabilities at ORNL to interrogate soil carbon and mineral interactions,” Mayes said. “Our latest research is an introduction to using these techniques to study a system at a very small scale. Now that we know this method works, we can begin to understand the fundamental principles governing organic carbon storage and reactions in soils.”