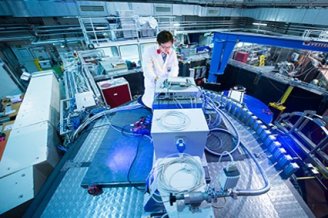 Transporting electricity without losses is the promise of superconducting materials. Two research teams have studied the new class of iron-based superconductors at the instrument PUMA the Heinz Maier-Leibnitz centre and independently came to the same surprising result: The superconducting Cooper pairs change their symmetry.

Scattered neutrons off from an unconventional superconductor often carry the information about the structure of the superconducting electron pair (Cooper pair). Here, researchers always observed in the iron-containing superconductors a peculiar excitation of spins briefly below the transition temperature at which the material becomes superconducting. This so-called magnetic resonant mode indicates a phase reversed alignment of the electron compass needles, supporting that the spin excitations are a sort of “glue” for the Cooper pairs.

With the collaboration of TUM scientist Dr. Jitae Park on three-axes spectrometer PUMA, however, the two scientific teams from Japan and China led by Dr. Chul-ho Lee at Advanced Industrial Science and Technology and Porf. Jun Zhao at Fudan University observed a transition from phase-reversed to phase-preserved Cooper pair formation. This reversal of the signs obviously depends on the degree of doping of the iron-selenide and iron-arsenide superconductors under investigation: If the superconductor had more than 50% sulfur in the iron-selenides and 80% of potassium in the iron-arsenides added, the mode suddenly disappears, indicating that the electron pairs changed back to phase-preserved symmetry.