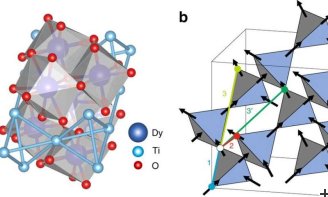 Atomic structure of Dy2Ti2O7 (a) Atomic structure of Dy2Ti2O7 comprised of tetrahedra of magnetic dysprosium ions (blue) and nonmagnetic octahedra of oxygen ions (red) surrounding titanium ions (cyan). (b) The magnetic moments located on dysprosium ions are constrained by crystal field interactions to point in or out of the tetrahedra. They form a corner sharing pyrochlore lattice. The pathways of nearest neighbor (1), next-nearest-neighbor (2) and two inequivalent next-next-nearest neighbor (3 and 3′) interactions are shown as thick colored lines. Credit: Alan Tennant, ORNL

One such method is neutron scattering, in which neutral particles called neutrons are scattered off a material to uncover its microscopic properties from the resulting interactions. However, reconstructing a material’s structure and properties proves to be challenging, even for seasoned experts.

For the first time, a team at the US Department of Energy’s (DOE’s) Oak Ridge National Laboratory (ORNL) is using artificial intelligence (AI) to find patterns in neutron scattering data that can lead to an understanding of the physics inside quantum or complex magnetic materials. Led by Alan Tennant, Initiative Lead for Quantum Materials at ORNL, the team recently trained an artificial neural network (ANN) to successfully interpret data from a neutron scattering experiment performed at ORNL’s Spallation Neutron Source (SNS). The team trained the network by feeding it data from neutron scattering simulations performed on systems at the Oak Ridge Leadership Computing Facility (OLCF), including the center’s decommissioned Cray XK7 Titan. One of the most powerful machines of its time, Titan continues to supply the scientific community with new discoveries even after its retirement last fall.

“Before, when you would do an experiment, you weren’t entirely sure you had the right result,” Tennant said. “With this neural network, we can be confident in the answer due to the extensive training that the network had to go through. Of all the possible cases it encounters, it can find the optimal solution.”

The network can reveal new information about current neutron scattering experiments and even provide insight into which experiments would be most beneficial to run in the future.

The results of the study were recently published in Nature Communications, and the team is continuing the work on the OLCF’s 200-petaflop IBM AC922 Summit, the world’s most powerful supercomputer.

Researchers who perform these experiments can typically come up with many different scenarios for a material’s Hamiltonian, the expression of the material’s energy that completely describes its properties. But they can’t possibly account for every single one – especially in materials such as spin ices. Spin ices, magnetic analogues of ices, are thought to possess exotic magnetic states where north and south magnetic poles can separate and behave independently, something other magnets are unable to do. Determining the underlying interactions in these materials has proven to be very challenging, however.

Training an ANN, a type of machine learning that can analyze patterns in data and operates in a way similar to the neural networks in a human brain, is one possible solution.

“Humans can never go through all the scenarios, because there’s always ones you’ve never thought about,” said Anjana Samarakoon, a postdoctoral research associate at ORNL who worked closely with Tennant on the project. “But a computer can go through hundreds of thousands of scenarios and summarize the information for you. And so it becomes kind of dependable – it solves one of your big problems.”

The team trained an autoencoder – a type of ANN often used for compressing and recreating images – using tens of thousands of simulations (more than 50 billion calculations) on the supercomputing resources at the OLCF, a DOE Office of Science User Facility at ORNL. The team was able to simulate many more scenarios than a human is capable of examining. The team also found that the ANN filters out experimental noise to pull out only the most important information from the raw scattering data to recreate a material’s structure.

“It does what an expert does, but it does something far beyond,” Samarakoon said. “This can do ten thousand models instead of the simple 100 or so that a human can do.”

After the researchers trained it, the ANN could compare the simulated data with experimental scattering data recorded from the CORELLI instrument at SNS, which is designed to probe the disorder in materials such as glass. The ANN accurately captured data for 1,024 sites in the material Dy2Ti2O7, a spin ice that has glass-like properties at low temperatures.

“We don’t know the physics behind why glasses work,” Tennant said. “But this material lends itself to study due to the amazing mathematics we can use to understand it. Oak Ridge is a place where we can really do the research on these kinds of complex materials.”

The team used the Compute and Data Environment for Science (CADES) at ORNL in combination with the systems at the OLCF for further analysis of the simulations. After training the network with the simulations, it ultimately determined a model Hamiltonian to describe the material’s magnetic properties, including the point at which it turns into something akin to glass.

“We were able to do all the simulations we needed for the training examples at the OLCF,” Samarakoon said. “With Summit, we can run even deeper nets in a more interactive way and explore even more unknowns.”