Searching for Dark Energy with Neutrons 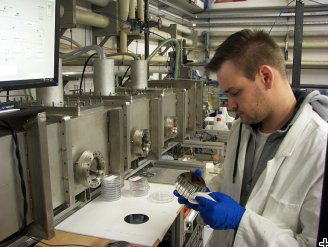 Polarisator UCN PhD student Thorsten Zechlau at the sputtering machine of the FRM II, which produced the polarisators for the ultra cold neutrons. | © FRM II / TUM

It does not always take a huge accelerator to do particle physics: First results from a low energy, table top alterative takes validity of Newtonian gravity down by five orders of magnitude and narrows the potential properties of the forces and particles that may exist beyond it by more than one hundred thousand times. The technical premises for this measurement was developed at Heinz Maier-Leibnitz Zentrum by researches of the Technische Universität München.

All the particles we know to exist make up only about five per cent of the mass and energy of the universe. The rest – “Dark Matter” and “Dark Energy” – remains mysterious. A European collaboration lled by researchers from the Vienna University of Technology has now carried out extremely sensitive measurements of gravitational effects at very small distances at the Institut Laue-Langevin (ILL) in Grenoble. These experiments provide limits for possible new particles or fundamental forces, which are a hundred thousand times more restrictive than previous estimations.

Undiscovered Particles?
Dark matter is invisible, but it acts on matter by its gravitational pull, influencing the rotation of galaxies. Dark energy, on the other hand, is responsible for the accelerated expansion of the universe. It can be described by introducing a new physical quantity – Albert Einstein’s Cosmological Constant. Alternatively, so-called quintessence theories have been put forward: “Perhaps empty space is not completely empty after all, but permeated by an unknown field, similar to the Higgs-field”, says Professor Hartmut Abele (TU Vienna), director of the Atominstitut and group leader of the research group. These theories are named after Aristotle’s “quintessence” – a hypothetical fifth element, in addition to the four classical elements of ancient Greek philosophy.

If new kinds of particles or additional forces of nature exist, it should be possible to observe them here on earth. Tobias Jenke and Hartmut Abele from the Vienna University of Technology developed an extremely sensitive instrument, which they used together with their colleagues to study gravitational forces. Neutrons are perfectly suited for this kind of research. They do not carry electric charge and they are hardly polarizable. They are only influenced by gravity – and possibly by additional, yet unknown forces. Theoretical calculations analysing the behaviour of the neutrons were done by Larisa Chizhova, Professor Stefan Rotter and Professor Joachim Burgdörfer (TU Vienna). U. Schmidt from Heidelberg University and T. Lauer from TU Munich contributed with an analytic tool.

Technology from Garching
For the experiment in Grenoble the neutrons, which have a kind of compass in their interior, had to be pretreated . The compass needles of the neutrons get all the same direction. For this purpose Dr. Thorsten Lauer and his team develeped at the research neutron source of the TUM a so called polarizer. Worldwide, there are , according to Lauer only a handful of research groups that can construct such a system for ultracold neutrons. Thanks to the production capabilities with a unique coating system and the test possibilities of the instruments TREFF and Mephisto at the Heinz Maier-Leibnitz Zentrum, it is particularly effective in the alignment of the compass needles of the neutrons. “These precise measurements were possible only with the help of the Munich technology,” says Professor Dr. Hartmut Abele . The work was funded by the DFG priority program “Precision experiments in particle -and astrophysics with cold and ultracold neutrons “ (Prof. Dr. Stefan Paul).

Forces at Small Distances
The technique they developed takes very slow neutrons from the strongest continuous ultracold neutron source in the world, at the ILL in Grenoble and funnels them between two parallel plates. According to quantum theory, the neutrons can only occupy discrete quantum states with energies which depend on the force that gravity exerts on the particle. By mechanically oscillating the two plates, the quantum state of the neutron can be switched. That way, the difference between the energy levels can be measured.

“This work is an important step towards modelling gravitational interactions at very short distances. The ultracold neutrons produced at ILL together with the measurement devices from Vienna are the best tool in the world for studying the predicted tiny deviations from pure Newtonian gravity”, says Peter Geltenbort (ILL Grenoble).
Different parameters determine the level of precision required to find such tiny deviations – for instance the coupling strength between hypothetical new fields and the matter we know. Certain parameter ranges for the coupling strength of quintessence particles or forces have already been excluded following other high-precision measurements. But all previous experiments still left a large parameter space in which new physical non-Newtonian phenomena could be hidden.

A Hundred Thousand Times Better than Other Methods
The new neutron method can test theories in this parameter range: “We have not yet detected any deviations from the well-established Newtonian law of gravity”, says Hartmut Abele. “Therefore, we can exclude a broad range of parameters.” The measurements determine a new limit for the coupling strength, which is lower than the limits established by other methods by a factor of a hundred thousand.Even if the existence of certain hypothetical quintessence particles is disproved by these measurements, the search will continue as it is possible that new physics can still be found below this improved level of accuracy. Therefore, Gravity Resonance Spectroscopy will need to be improved further – and increasing the accuracy by another few orders of magnitude seems feasible to the Abele’s team. However, if even that does not yield any evidence of deviations from known forces, Albert Einstein would win yet another victory: his cosmological constant would then appear more and more plausible.