Nuclear techniques have allowed archaeologists to see into an embedded section of an ancient Australian Indigenous stone artefact non-invasively—suggesting important information about its origin and use. 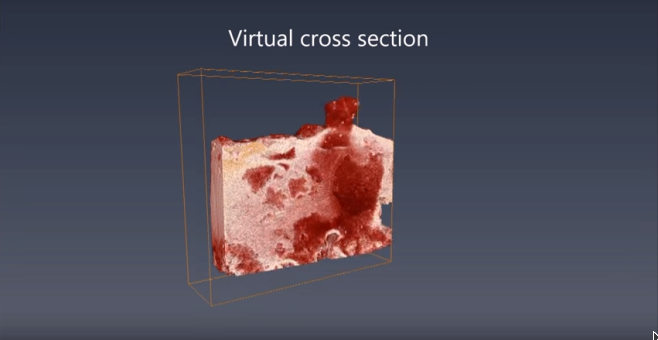 ANSTO instrument scientist Floriana Salvemini used neutron tomography on Dingo to reconstruct high resolution images of an artefact that was found by archaeologists embedded in a limestone reef on Barrow Island, off the northwest coast of Western Australia.

The stone tool was made of chert, an ‘exotic lithic’ which is high in silica and not found on Barrow Island. This led researchers from the University of Western Australia to deduce that it had come from the mainland, possibly transported by early Australians.

Dating of sediments from an overlying dune on Barrow Island undertaken at the University of Oxford provided an age estimate of 41,000 ka (years before the present time) for the chert.

The image reconstruction provided evidence of an absence of fractures on the surface of an embedded section of the core.

The authors, led by Ingrid Ward of the University of Western Australia, said the findings suggested that the chert had undergone some level of transport and/or exposure and weathering before it was embedded in the reef sometime been 41 ka and 14.5 ka.

Barrow Island was connected to the mainland by a land bridge until about 7.4 ka, when rising sea levels cut it off.

The study has published in the Journal of Archaeological Science: Reports.

The authors noted that it was unusual for a core to retain the amount of mass seen in this chert, let alone remain relatively unmodified.

In stone toolmaking, techniques are used to reduce sections from a core within a desirable raw material to fracture it into shell-like curves or shape the core itself into a tool.

The final product might be a flake, axe head, spear point, grinding tool or other functional stone implement.

A used core usually has characteristic marks on its surface, produced by the blows of a hammerstone or hollows where there were once sections of material.

Instead the investigated piece has very few signs of edge modification. This means it was probably lost early in its transport cycle to the island, likely from the Pilbara region, and incorporated into a sand body – to eventually become embedded in the calcarenite.

Dingo’s thermal neutrons probe can penetrate stone non-invasively while providing high resolution images of large samples. Because the chert and the limestone encasing absorb neutrons at different rates the two materials can be differentiated by neutron imaging.

“Neutron tomography is a powerful tool to study the inner structure and morphology of such rarely preserved artefacts without damaging them. By using complementary non-invasive methods, we were able to preserve the association between the artefact-archaeological unit and the connected interface layer for future investigations,” said Salvemini.

The paper authors note that there are only two other known embedded chert artefacts in Western Australia, one from Rottnest Island and another form Point Peron. Their future study can help researchers to understand more about early Australians.