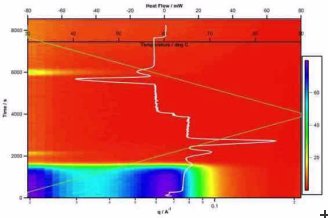 Caliometry Figure 1 - Time-evolution of SANS data from demixed equimolar C30H62:C36H(D)74 mixture during heating and cooling at 1 K/min; DSC data, collected simultaneously, are superimposed. Intensity is shown on a linear colour map (right). DSC data are shown as a solid curve and the temperature profile of the DSC experiment is shown as a dotted line.

When materials are subjected to an external parameter, or placed under conditions that mimic processing, associated structural changes can be identified by measurement of the initial and final states.

However, the information obtained from real-time measurements is generally more valuable, enabling structural changes to be continuously monitored under the external, and possibly varying, constraints. Thus, whenever possible, it is advantageous to combine complementary experimental methods into a single simultaneous study.

One such method is Differential Scanning Calorimetry – a thermoanalytical technique that enables the phase changes in a sample, and the energy associated with such changes, to be identified by measuring heat flow as a function of temperature. While this method is widely used, it provides no detail regarding the structural changes that may occur during phase transitions.
When binary blends of normal alkanes, of the general formula CnH2n+2:CmH(D)2n+2, are quenched from the molten state to room temperature, the mixed system may undergo at one extreme, solid-state macrophase separation (C20:C36) and, at the other, indefinitely stable solid solutions (C34:C36).

Between these two extremes, incommensurate lamellar structures of varying periodicity are formed, and in which the chain-length mismatch determines both the rate and extent of phase separation.

In his PhD thesis and associated publications [1-9], Elliot Gilbert employed Small-Angle X-Ray Scattering (SAXS) and Small-Angle Neutron Scattering (SANS), in which one of the chains was deuterated) and DSC to study the influence of chain-length difference, as well as molar composition and confinement, on the dimensions of the superstructure and the associated phase changes occurring during heating and cooling the ‘demixed’ material.

For almost thirty years, it has been possible to perform synchrotron-based SAXS experiments whilst simultaneously measuring DSC, yielding valuable information on a broad range of materials, including polymers and liquid crystals, and specifically on the correlation between structural and thermal transitions.

However, for these alkane systems, SANS has been used to great advantage, as phase separation can be detected at a much earlier stage relative to SAXS – minutes instead of days – since the contrast between the chains can be increased with isotopic deuterium labelling. This enables the parent repeat of the demixed superstructure to be observed. These materials thus form the basis for a long-standing motivation for the development of combined SANS and DSC.

The design for a combined SANS-DSC system has just been published in the April edition of Measurement Science and Technology with co-authors Stewart Pullen, Norman Booth, Scott Olsen, Ferdi Franceschini and David Mannicke at the Bragg Institute and Benjamin Day of Hobsons Instrument Services.

The approach has employed both the extensive customisation of a commercial DSC unit and the development of a novel crucible design that enables thermal control, while ensuring neutron beam access to the sample in transmission geometry. The modification of a commercial DSC offers significant advantages, in terms of the quality of DSC data obtained, compared to alternatives based on modified optical stages.

The combined system has been designed for a maximum neutron beam size of 5 mm and access to scattering angles of up to 36° in the horizontal plane, the latter matching the maximum available on QUOKKA.

Figure 1 (below) shows the time-evolution of SANS data from a demixed equimolar C30H62:C36D74 mixture during a heating and cooling DSC measurement. Data shown have been radially averaged but not yet corrected for empty crucible background nor blocked beam. DSC data, collected at a ramp rate of 1 K/min are superimposed on the SANS data with time uncertainty of +/- 1 second.

DSC data are shown as a solid curve and the temperature profile of the DSC experiment is shown as a dotted line.

The data were collected continuously in event-mode acquisition, enabling post-experimental time binning throughout the phase transitions, of which three are observed. The first endotherm is absent both on cooling (and subsequent re-heating) and is associated with the mixing transition of the demixed phase; the second and third endotherms are associated with an orthorhombic-to-rotator (solid-solid), Trot, and rotator-to-melt, Tm, transitions respectively.

The times corresponding to onset, peak and endset transition temperatures, obtained from DSC analysis, were used to time-bin the SANS data and enable a complete data reduction onto an absolute scale.

Figure 2 (below) shows binned SANS data collected below, during and following all three transitions on heating. It is apparent that the peak at q = 0.07 Å-1, which is intense at temperatures below the first endotherm, decreases slightly at the onset, by more than 50% at the peak of the endotherm, and is absent thereafter. 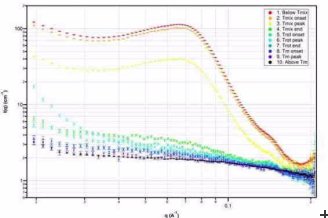 SANS data Figure 2 – SANS data on absolute scale from equimolar C30H62:C36H(D)74 mixture throughout a heating profile below, during, and at the end of, each of the three endotherms.

The peak corresponds to a real-space dimension of ca. 90 Å and is approximately equal to the sum of the d-spacings of the individual pure components in their orthorhombic crystal structure (d = 40 Å and 49 Å for C30H62 and C36D74, respectively). This scattering peak does not return on cooling, nor does the first DSC endotherm observed on heating re-appear on cooling.

This shows that the feature observed in the SANS is associated with this first DSC transition and with mixing of the previously demixed, modulated alkane superstructure. On mixing, the contrast reduces dramatically, and the scattering is consistent with a locally mixed alkane blend. It is only on sufficient ageing that this endotherm may re-appear with the associated enthalpy and onset temperature increasing with time.

This experiment demonstrates the ability to conduct, for the first time, simultaneous SANS and DSC measurements.

Further studies are underway to apply this method to a broad range of other materials. The ability to conduct simultaneous DSC and SANS studies allows investigators to use these two complementary techniques to provide insight into structural and thermal changes and opens up the opportunity for SANS to make significant new contributions to a range of systems in which either scattering contrast is insufficient in SAXS studies, or where neutron scattering is essential or inherently desirable (e.g. isotope effects).

The device is now available for users via the dropdown sample environment selection in the proposal portal.

Potential users are advised to contact Elliot Gilbert, concerning the suitability and optimisation of this device for their systems of interest, prior to submitting proposals.