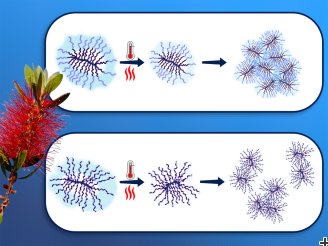 They look like microscopic bottle brushes: Polymers with a spine and tufts of side arms. This molecular design gives them unusual abilities: For example, they can bind active ingredients and release them again when the temperature changes. With the help of neutrons at the MLZ, a research team from the Technical University of Munich (TUM) has now succeeded to unveil the changes in the internal structure in course of the process.

“The structure of the bottle-brush polymers, which are only nanometers in size, cannot be investigated using classical optical methods: It can be seen that an aqueous solution containing these polymers becomes turbid at a certain temperature. But why this is the case, and how the spine and the side arms stretch or contract in the water, has not yet been clarified,” reports Prof. Christine Papadakis.

There is a simple reason why scientists would like to know more about the inner life of bottle-brush polymers: The fluffy molecules, which are formed from different polymer chains and abruptly change their solubility in water at certain temperatures, are promising candidates for a variety of applications.

For example, they could be used as catalysts to accelerate chemical reactions, as molecular switches to open or close tiny valves, or as transport media for medical agents – the molecular brushes could thus bring pharmaceuticals to a center of inflammation and, because the temperature is elevated there, release them directly at the site of action.

However, the basic prerequisite for using the brush molecules is that their behavior can be programmed: Theoretically, chemists can use a combination of water-soluble and water-insoluble building blocks to determine precisely at what temperature the polymers clump together and the liquid in which they were just dissolved becomes turbid. “In practice, however, you have to know exactly how and under what conditions the structure of the polymers changes if you want to design smart brush molecules,” explains Papadakis.

Together with her team in the Soft Matter Physics Group at the Technical University of Munich, she has now been able to visualize for the first time the changes that bottle-brush polymers with arms made of two different types of building blocks undergo when the temperature reaches the cloud point.

The scientists used neutron radiation from the Research Neutron Source Heinz Maier-Leibnitz (FRM II) on the campus Garching at a special instrument KWS-1 for small angle neutron scattering, which is operated by the Forschungszentrum Jülich.

This method is particularly well suited for the investigation because neutrons are electrically neutral and therefore penetrate matter easily. There they are scattered by the atomic nuclei, which results in detailed information about the brush molecules. In combination with modern cryo electron microscopy, a detailed understanding of these molecules could be obtained.

The thermoresponsive brush molecules studied by Papadakis’ team were synthesized by chemists from the National Hellenic Research Foundation in Greece and the Technische Universität Dresden, respectively.

In the first step, the samples were dissolved in water, then gradually heated up to the cloud point and irradiated with neutrons. A detector monitored the scattered radiation. From the scattering signal, the researchers were able to deduce the structural changes.

“The results will help to develop bottle-brush polymers suitable for practical use,” the physicist is convinced. “If you know exactly how polymers change at the cloud point, you can optimize their chemical structure for different applications.”