A research team at the HZB has precisely characterised for the first time the various types of defects in kesterite semiconductors. They achieved this with the help of neutron scattering at the BER II research reactor and at Oak Ridge National Laboratory in the USA. The findings point to a means of guided optimisation for kesterite solar cells.

Kesterites are an economical and environmentally friendly materials which are semiconducting as well as being able to convert light into electricity. Concerning their crystal structure, kesterites resemble species of chalcopyrite semiconductors with the chemical formula Cu(In,Ga)Se2. In kesterites such as Cu2ZnSnSe4 (CZTSe) though, the rare-earth elements indium and gallium are replaced by zinc and tin, which are abundant in the earth’s crust and are far less expensive. Currently, the best kesterite-based thin film solar cells achieve an efficiency levels of up to 12.6 per cent with the kesterite layer only one micron thick. They are therefore interesting candidates for highly cost-effective as well as flexible solar modules that are non-toxic and robust. Even though single-crystal silicon solar cells or thin layers of chalcopyrite achieve efficiency levels of far more than 20 per cent, these are considerably more expensive.

Some defects may increase efficiencies

The highest efficiency levels are achieved in kesterite-thin film solar cells with CZTSe-absorber layers that contain somewhat less copper in comparison to the chemical formula and somewhat more zinc, i.e. present a copper-poor/zinc-rich composition. This kind of stoichiometric deviation leads to defect sites in the crystal structure that apparently increase the efficiency level, though. “We have now precisely characterised these defect sites and ascertained their local concentrations with the help of neutron diffraction experiments”, explains Dr. Galina Gurieva from the HZB Structure and Dynamics of Energy Materials group. 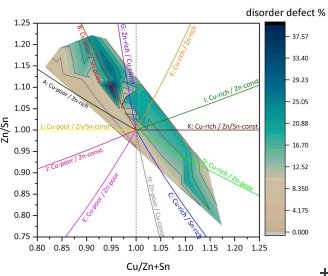 Neutron diffraction is the ideally suited method for this purpose. The two elements (Cu+ and Zn2+) can be extremely well differentiated from one another using neutrons, which is not the case for conventional X-ray diffraction studies. The team investigated 29 different CZTSe powder samples using the neutron sources SNS at Oak Ridge National Laboratory (USA) and BER II at the HZB. They were successful in their effort to exactly catalogue various defect types. For instance, they were able to identify sites in the crystal structure at which a copper atom was missing (copper vacancies, VCu), as well as sites that were occupied by another element instead of the anticipated element, such as a zinc atom in place of a tin atom (ZnSn anti site).

Beside the presence of point defects, which can be explained via stoichiometry deviations, the so called Copper/Zinc disorder plays an important role as well: Disorder means that copper atoms are sitting on Zinc sites in the crystal structure and vice versa. This disorder can be reduced via a heat treatment (annealing), which enhances often the efficiency of CZTSe based solar cells.

“The point defects we investigated experimentally really correspond quite well to the theoretical model of potential defects”, declared Gurieva. “We can deduce concrete clues from this study as to which point defects in which concentration to expect in the given composition of kesterite thin films ”, says Gurieva. “This may help to optimise kesterite based solar cells further.”