Steps towards understanding the exotic atomic nuclei behind reactions in stars 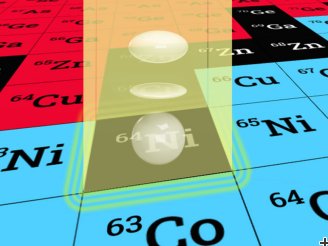 Recent experiments jointly conducted at the Institut Laue-Langevin (ILL) alongside three other laboratories around the world have revealed a surprisingly complex landscape of three different coexisting shapes in 64 Ni, a semi-magic nucleus thought to be purely spherical up to now.

This experimental achievement is used to benchmark theoretical models that help us to understand the structure of “exotic” nuclei that power reactions in stars, in conditions that cannot be reproduced in laboratories on Earth.

Theoretical models are a fundamental tool for researchers. In Nuclear Physics, there is no unique description of atomic nuclei and a range of approaches have been used to predict nuclear properties in different mass regions. For example, ab initio models consider all nucleons in the solution of the nuclear many-body problem and are quite accurate for light elements with few particles, such as Helium, Lithium, and Carbon, but are not applicable to heavy elements.

Instead, mean-field models can be used to describe nuclear states through the notion of shapes. An excited nucleus may take a given shape, and some time is needed before it decays back into its ground state where it is most stable. Nuclei located in the nuclear chart close to “magic nuclei” (in which nuclear shells are completely filled) are usually spherical in the ground state, but sometimes acquire a form of ellipsoid, if excited. This can be of particular interest to researchers as it helps us to understand the microscopic origin of deformation in compact objects like the atomic nucleus, as well as shape coexistence phenomena, which occur when different shapes are present in nuclei at similar levels of excitation energy.

In a recent paper in Physical Review Letters (2020), researchers from Europe, USA and Japan studied the phenomenon of coexisting shapes in the nucleus of 64 Ni. This intriguing nucleus belongs to the semi-magic Nickel isotope chain and is close to the doubly magic 68 Ni system, thus allowing researchers to systematically study the deformation landscape along the nuclear chain.

FIPPS and neutrons at the ILL

Establishing the shape of a nucleus, and hence the presence of coexisting shapes, requires the use of a range of experimental tools and analysis. This paper involved four such experiments around the world – including a 20-day measurement using the ILL’s Fission Product Prompt Gamma–Ray Spectrometer (FIPPS).

“This was a beautiful adventure – a true tour de force involving different laboratories to study the 64 Ni isotope, and the ILL played a crucial role as did the others,” says Dr. Caterina Michelagnoli, Instrument Scientist responsible for FIPPS. “The FIPPS instrument, recently installed at the ILL, detects gamma rays that are emitted from excited nuclei produced when neutrons are captured in the target material. By looking at these gamma rays, one can infer information about the complex interactions between protons and neutrons in the nucleus, pinning down its nuclear structure.”

Dr. Michelagnoli also adds, “The 64 Ni experiment was an exciting enterprise for the ILL. Because of the availability of the FIPPS instrument, the ILL is unique among the neutron facilities in the world where such measurement was possible. It was not only a challenge from the detection point of view, but also because of the nature of the target material. The 63 Ni target, used to create the excited 64 Ni nucleus, was highly radioactive and required extraordinary protection, health and safety protocols, which again could be accomplished at the ILL.”

The combination of the ILL’s high neutron flux, the highly-performing FIPPS instrument and the long measurement time, allowed to accumulate exceptionally high statistics data, which provided detailed information on all quantum mechanical properties of 64 Ni, including angular momentum and parity of the excited states. The unique geometry of the FIPPS spectrometer, with detectors placed in a large range of angles, played a crucial role in acquiring information about the distribution of gamma rays in space, what clearly established the coexistence of 0+ and 2+ states with intrinsic spherical, oblate and prolate ellipsoidal shapes.

The calculations necessary to describe the experiment turned out to be so complex that, in Japan, a computer infrastructure of more than one million processors was needed to perform them.

As with much of scientific evidence, one experiment is not enough to confirm the results. Complementary experiments of varied lengths, as well as complexity of the setup, had to be conducted in three other facilities, with substantial financial contributions and knowledge expertise. They include: transfer reactions at the IFIN-HH Tandem Laboratory, Romania; Coulomb excitation at the Argonne National Laboratory, USA, and nuclear resonance experiments at the Triangle Universities Nuclear Laboratory, USA. These experiments were performed by a large collaboration lead by experimentalists and theoreticians from ILL, Romania (IFIN-HH), Poland (IFJ-PAN, Krakow), Italy (University of Milan), USA (Triangle Universities) and Japan (University of Tokyo).

“The exceptional quality of the ILL data collected with FIPPS was crucial, in our multi-messenger approach, to prove without a doubt the complex scenario of different nuclear shapes in 64 Ni” says Dr. Nicu Mărginean, leading author and presently Director of the IFIN-HH Nuclear Physics Institute in Romania.

The researchers have used their results to test state-of-the-art models of nuclear structure. A full calculation of the structure of systems as heavy as 64 Ni is often impracticable as it requires too much computational power. A remarkable exception is the Monte Carlo shell model which is able to capture the relevant components of interest. By using a super-computer in Japan, the researchers were pleased to find that such calculations could closely reproduce the multifaceted landscape of deformation in the Nickel nuclei. These semi-magic nuclear systems were used to identify a previously unconsidered component of the nucleon-nucleon interaction, the monopole, which is responsible for the coexistence of different ellipsoidal shapes in the 64 Ni nucleus.

This paper is also another step towards seeing how deformation evolves through the Nickel isotope chain. “For example, 78 Ni is the holy grail of Nuclear Physics – with 50 neutrons and 28 protons, it is very far from the line of stability. Scientists have recently produced and studied this element, and our results can help understanding what component of the nucleon-nucleon interaction plays a role in driving its shape”, explains Dr. Michelagnoli.

Further, information from nuclear gamma decays can be used to refine nuclear models required for astrophysical studies. For example, the deformation of nuclei in their ground and excited states can influence beta decay half-lives, with consequences in nucleosynthesis processes occurring in supernovas.

“The full description of the nuclear chart is far beyond what we can do right now, but this study on 64 Ni provides another firm point in mapping it. In this way, we have started painting a better picture of the evolution of deformation along the Nickel isotope chain, which can be instrumental in predicting the structure of nuclei not accessible in laboratory on the Earth today, but produced in stars”, concludes Michelagnoli.