Superconductivity switched on by magnetic field 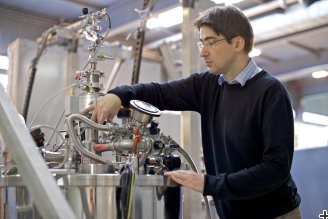 The material CeCoIn5 is superconducting at very low temperatures. As expected, superconductivity is destroyed in the presence of very strong magnetic fields (in the case of this material above 12 Tesla). Researchers at the Paul Scherrer Institute have now demonstrated that before this happens, a new exotic state of the material is created in strong magnetic fields. In this state, an additional antiferromagnetic order is observed in addition to superconductivity, i.e. the magnetic moments (the “elementary magnets”) in the material partly point in one direction and partly in the opposite direction in a regular manner. Symmetry arguments lead to the conclusion that a novel quantum state must be linked to this magnetic order. 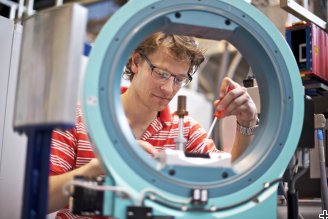 Simon Gerber at Morpheus Instrument Simon Gerber, first author of the publication on the superconducting properties of CeCoIn5 at the Morpheus instrument of the Spallation Neutron Source SINQ. (Photo: Paul Scherrer Institute/Markus Fischer)

The antiferromagnetic order in the material was detected in neutron experiments at PSI’s neutron source SINQ and at the Institut Laue-Langevin in Grenoble. In these experiments, a neutron beam passes through the material and then the investigators observe in which directions large numbers of neutrons are scattered. This permits conclusions about regular structures inside the material. In this case, an additional direction emerged in which many neutrons were diffracted at high magnetic fields. This corresponded to the antiferromagnetic order or, to be precise to a spin density wave. That means when you move in a certain direction through the material, the magnetic moments first point in one direction, become larger and then smaller and then point in the opposite direction, become bigger and then smaller again etc. If you draw the moments as arrows then their tips can be joined by a wave line. 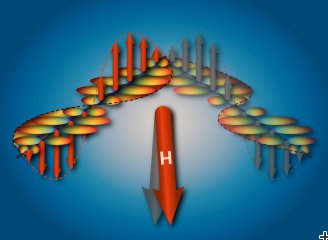 Spin density wave Depending on the orientation of the magnetic field (H), the triggered spin density wave (red arrows or grey arrows) can move in different directions. The superconductivity, which is generated at the same time, is modulated by the spin density wave (Illustration: Paul Scherrer Institute/Simon Gerber).

“The observed behaviour of the material was completely unexpected and is certainly not a purely magnetic effect”, explains Michel Kenzelmann, head of the PSI research team. “This is a clear indication that in the material the new superconducting state occurs together with the spin density wave, as is also expected from symmetry arguments.” The special feature of this state is that it is very closely linked to the magnetic order. This means that they both become stronger when the strength of the outer magnetic field is increased. Hence, by means of the external magnetic field, one can directly control the quantum state which is linked to superconductivity. The possibility of directly controlling quantum states may be important for possible future quantum computers. “Even if this particular material will probably not be used because of the low temperatures and strong magnetic domains required, our experiments show what this kind of control could, in principle, look like”, adds Simon Gerber, first author of the publication.

The Paul Scherrer Institute develops, builds and operates large, complex research facilities, and makes them available to the national and international research community. The Institute’s own key research priorities are in the investigation of matter and material, energy and the environment; and human health. PSI is Switzerland’s largest research institution, with 1500 members of staff and an annual budget of approximately 300 million CHF.

Laboratory for Development and Methods at PSI: www.psi.ch/ldm/