Superconductor with a twist 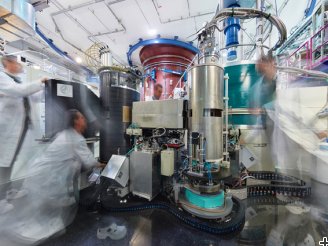 American, Chinese and German scientists have found tiny distortions among the otherwise symmetrical atomic order of an iron pnictide superconductor with measurements at the triple axes spectrometer TRISP. They have thus come closer to superconductivity at higher temperatures.

Conducting electric current without loss – that is the promise of superconductors. But so far only materials are known that conduct current at very low temperatures without resistance. Scientists are therefore constantly trying to increase the so-called transition temperature, at which materials become superconducting, or to find out exactly what happens at the atomic level.

With the help of neutrons, among others methods, at the Heinz Maier-Leibnitz Zentrum, the physicists have now measured the lattice distances at -240°C of an iron pnictide superconductor near the point of optimal superconductivity. The trigger that causes the crystal to conduct current without resistance seems to be a unique structural transformation for this class of materials: After a tetragonal arrangement, the material takes on an orthorhombic structure. In a tetragonal crystal, the atoms are arranged as cubes that have been stretched in one direction. An orthorhombic structure is shaped like a brick. 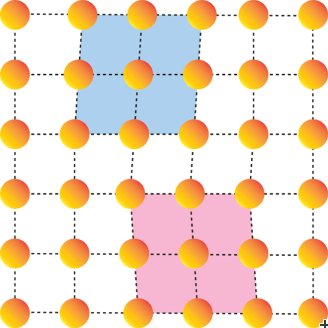 TRISP_Scheme The square-shaped arrangement of atoms in a pnictide superconductor is locally distorted (red, blue). This means that it contains orthorhombic structures.

It is known that sodium-iron-arsenic-pnictide crystals are tetragonally arranged until they are cooled down to the transition temperature of -240°C, which forces the lattice into an orthorhombic structure. This is a step towards superconductivity at low temperatures. In the neutron measurements, with Dr. Thomas Keller from the Max Planck Institute for Solid State Research, however, the researchers surprisingly found abnormal orthorhombic regions at far higher temperatures than the actual transition temperature. They report that this occurred in samples that were minimally doped with nickel and persisted when the materials were over-doped.

Knowing how much nickel must be added to influence the transition temperature could also increase the temperature at which the iron pnictides become superconducting.