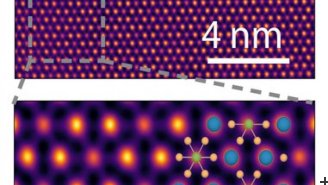 The crystalline solid BaTiS3 (barium titanium sulfide) is terrible at conducting heat, and it turns out that a wayward titanium atom that exists in two places at the same time is to blame.

The discovery, made by researchers from Caltech, USC, and the Department of Energy’s Oak Ridge National Laboratory (ORNL), was published on November 27 in the journal Nature Communications. It provides a fundamental atomic-level insight into an unusual thermal property that has been observed in several materials. The work is of particular interest to researchers who are exploring the potential use of crystalline solids with poor thermal conductivity in thermoelectric applications, in which heat is directly converted into electric energy and vice versa.

“We have found that quantum mechanical effects can play a huge role in setting the thermal transport properties of materials even under familiar conditions like room temperature,” says Austin Minnich, professor of mechanical engineering and applied physics at Caltech and co-corresponding author of the Nature Communications paper.

BaTiS3 belongs to a class of materials called Perovskite-related chalcogenides. Jayakanth Ravichandran, an assistant professor in USC Viterbi’s Mork Family Department of Chemical Engineering and Materials Science, and his team have been investigating them for their optical properties and recently started studying their thermoelectric applications.