Toward New Precision in Measuring the Neutron Lifetime 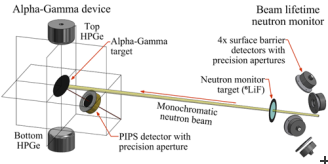 A team of PML scientists and collaborators* has achieved a five-fold reduction in the dominant uncertainty in an experiment that measured the mean lifetime of the free neutron (exceptionally long for an unstable particle), resulting in a substantial improvement of previous results.

That accomplishment, however, has further deepened the puzzling discrepancy between the lifetime values obtained with the technique used by the NIST collaboration and those from collaborations using a very different method, and the PML-led group is preparing to re-run an upgraded version of the entire original experiment to further reduce the uncertainty in the determined lifetime and evaluate the experimental approach.

Both protons and neutrons are made up of three quarks, and both will persist indefinitely when confined in a stable atomic nucleus. But outside an atom it’s a drastically different story. A proton is thought to endure at least 1034 years, give or take an aeon. A free neutron, however, lasts about 15 minutes before decaying into a proton, an electron, and an electron antineutrino in a process called beta decay.

Knowing the exact neutron lifetime is important to precision tests of the Standard Model. In addition, says Andrew Yue of the Radiation Physics Division’s Neutron Physics Group, first author on the collaboration’s recent paper in Physical Review Letters, “theoretical models of the formation of the light elements after the Big Bang are currently limited by the precision of neutron lifetime measurements.

“Also, the neutron lifetime is an important input parameter to calculations that determine the expected antineutrino flux from nuclear reactors, and these calculations do not agree with experimental observations.”

Making lifetime measurements is simple in concept, although extremely challenging in practice: Obtain a precisely known number of free neutrons and then count accurately how many decay or, conversely, measure the relative change in the number of neutrons after a specified time interval. In 2005, two separate groups employing two very different methods published lifetime measurements.

A collaboration headed by PML’s Jeffrey Nico used the “in-beam” method. “It counts the number of neutron decays in a section of a neutron beam, while simultaneously measuring the density of neutrons in that region of the beam,” Yue says. “In practice, this is accomplished with two devices. One is a cylindrical electromagnetic proton trap, arranged axially to surround a section of the beam, which collects and directs protons from neutron decay to a detector. The other is a neutron monitor (or counter) to determine the neutron density.”

Using that method on a beam of “cold” neutrons at the NIST Center for Neutron Research (NCNR), the researchers reported a lifetime of 886.3 ±1.2 [statistical] ±3.2 [systematic] seconds, which in 2005 was in good agreement with the existing world average of 885.7 ± 0.8 seconds.

The other group, headed by Anatoli Serebrov of the St. Petersburg Nuclear Physics Institute in Russia, used the “bottle” method, whereby a population of neutrons is confined in a storage vessel and the number of neutrons remaining in the bottle is measured at several different times. That group’s published value was 878.5 ± 0.7 [statistical] ± 0.3 [systematic] seconds.

To that end, the PML group began work to improve the in-beam lifetime measurement, and their recent publication describes a major step in preparation. “Everyone needed to go back and make sure that what they did was right,” says Yue, who came to NIST in 2006 as a graduate student specifically to address what was by far the largest source of uncertainty: determining the density of neutrons in the beam. The uncertainty could be substantially reduced, the NIST-led group noted in their 2005 paper “by an absolute calibration of the neutron counter.”

The neutron counting method employs a target – a thin (approximately 40 micrograms per cm2) film of lithium-6 deposited on a 50 mm diameter silicon wafer – which was exposed to the neutron beam. When neutrons are absorbed by 6Li, the reaction produces alpha particles and tritons which are then detected by four silicon surface barrier detectors facing the target. From the detected rate of alphas and tritons, the known probability of alphas and tritons striking the detectors, and the standard value** for the probability of neutron-lithium interactions (known as a neutron absorption cross section), the researchers could calculate the density of the neutrons in the beam.

“The cross section comes from a well-regarded and frequently used data set,” Yue says, “but it was the only input into the experiment not measured by the collaboration. Moreover, the year after the collaboration published the lifetime, the next revision of the cross section came out and the value had moved just outside its own previous quoted uncertainty. It was important to move to a calibration method for the neutron detector that was not dependent on the evaluated cross section.”

To do so, the group employed a novel system comprising two coordinated target-and-detector systems. One is the familiar neutron monitor composed of a 6Li target and four silicon surface barrier detectors. The other device, downstream from the first detector, is a detector that uses a 0.3 mm thick slab of boron carbide enriched in boron-10 to totally absorb an incident neutron beam. Two high-purity germanium detectors detect the gamma rays emitted when neutrons are absorbed by the 10B. Because the detectors would be overloaded by a high-flux beam, the team, led by Scott Dewey, used the monoenergetic neutron beam line NG-6m at the NCNR to arrive at what Yue calls “an ideal beam – not too weak, but not so intense that the detectors could no longer register individual events.”

By comparing the numbers from each detector system, the researchers were able to directly measure the efficiency of the 6Li neutron monitor, and used that efficiency to improve the neutron density determination in the 2005 paper. Those results cut the in-beam method’s systematic uncertainty to 1.9 seconds and raised the lifetime to 887.7 seconds. Taking into account corrections made by other lifetime experiments, there is now a difference of 3.8 standard deviations between the lifetimes determined by in-beam experiments and bottle experiments.

The team is now working towards re-running the entire lifetime experiment, using nearly all of the original apparatus, with reductions in several other uncertainties besides beam density.

** The values were taken from a widely used reference, the Evaluated Nuclear Data File.