Towards a new era for backscattering spectroscopy 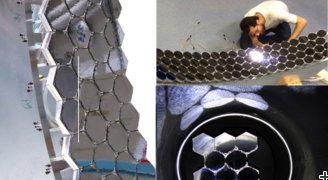 Towards a new era for backscattering spectroscopy Prototype of GaAs 200 crystal analyser used on IN16B for establishing a world record in energy resolution (left & top with Kristijan Kuhlmann). Bottom: view on the GaAs monochromator through the flight tube with reflections from the 4x4 mm2 crystals, set in hexagons with an edge length of 5.6 cm (photos: M. Appel (left & right bottom), B. Frick (right top)).

he energy resolution of neutron spectrometers using crystal optics is ultimately limited by the quality and the diffraction properties of the crystals used. Fifty years ago, under Heinz Maier-Leibnitz’s guidance, Berthold Alefeld, Manfred Birr and Anton Heidemann built the first neutron backscattering spectrometer using perfect Si 111 crystals at the FRM in Garching. They achieved a record-breaking 0.62 µeV energy resolution in neutron spectroscopy.

Today, in a collaboration financed by Germany’s Federal Ministry of Research, the ILL and the Friedrich-Alexander University (FAU) Erlangen-Nürnberg have taken a major stride towards the construction of a GaAs-based backscattering spectrometer. The result is a drop in energy resolution to several tens of nano-eV, nearly an order of magnitude better than could ever be attained with silicon crystals.

Over the last few years, the team has designed a prototype monochromator and analyser for ILL’s IN16B (see figures), using the (200) Bragg reflection of GaAs 200 instead of the (111) reflection of silicon. In hot commissioning they have demonstrated an unprecedented energy resolution of 78 neV, ten times narrower than the standard Si 111 configuration on IN16B and a factor of 4 smaller than the highest energy resolution ever attained. A series of challenges has had to be overcome to achieve this, as described in their original article published in Review of Scientific Instruments in the beginning of this year and highlighted in the March 2019 issue of Physics Today.

The reason why GaAs 200 crystals can provide higher energy resolutions than Si 111 crystals lies in the structure factor of their reflections. The gallium and arsenic sub-lattices and their respective coherent scattering lengths result by interference in a weak 200 reflection, which translates into larger penetration depth. Thus, a higher number of lattice planes contribute to this constructive interference at the 200 Bragg peak.

Insiders have known about this for a long time now, but they were also well aware of the challenge posed by the low expected count rates. As ILL’s Bernhard Frick explains: “The project depended on ILL’s high flux and IN16B’s large analyser area and excellent signal-to-noise ratio, as well as on the instrument’s design, which had included the GaAs option as a possibility from the beginning”. Andreas Magerl of FAU Erlangen adds that “We knew from prior investigations that good-quality GaAs crystals were becoming available, and we have been working closely with the semiconductor industry to obtain GaAs wafers suitable for the project”.

Significant efforts were put into controlling the quality of the crystals before selection. Two instrumental set-ups were designed and built at FAU and the ILL: in Erlangen, hyper-fine 10-6 strains in small crystals, introduced e.g. by mechanical handling, could be spotted using an energy-dispersive X-ray topography station, whilst in Grenoble instrument IN10 was converted into a two-crystal diffractometer with exact backscattering geometry, providing extremely accurate measurements of the lattice parameter of GaAs crystals. Kristijan Kuhlmann carried out his PhD thesis on this project: “We characterised more than a hundred crystals—looking at their structural properties and different types of mounting—to find the best suitable. And our industrial partner, Freiberger Compound Materials, was so impressed by the accuracy of our diffractometer that they asked us to perform additional measurements to characterise a set of reference crystals.”

To achieve the world record the researchers had to ensure that the reflection properties of GaAs 200 dominate the energy resolution. There were also other factors which could downgrade the resolution obtained: the size of the crystals (chosen to be 4 × 4 mm2), their alignment and facetted assembly, the strain on them (e.g. from gluing), their temperature stability and defects. The team even had to compensate for gravity, as neutrons gain or lose energy depending on their position in the 3 meter-high analyser (to the extent of about 100 neV/m). This prompted Markus Appel, the post-doc on the team, to build a temperature-control system based on Peltier elements, to introduce a top-to-bottom thermal gradient compensating for the gravity shift. This provided the stable crystal temperatures required. Markus explained that “If any one of these parameters were neglected, progress would have stalled. We would regularly step back, to identify and improve whatever was then the weakest link in the chain.”

Over the last 5 years the team has built a backscattering spectrometer demonstrator on IN16B. The 78 neV energy resolution they have obtained using GaAs 200 is an order of magnitude better than the standard Si 111 set-up on IN16B. This has convinced them that a full-scale spectrometer could now be built in a straightforward way providing energy resolution in the order of 50 neV to the user community. This heralds a new era for neutron spectroscopy.