Lithium ion batteries are highly efficient and provide electrical energy for laptops, mobile phones and lately also for the growing electric car market. But there are drawbacks to this technology: lithium is expensive and its extraction rather harmful to the environment. One possible alternative might be to substitute lithium with sodium – an element with similar chemical properties but much more abundant. Charging and discharging these batteries occurs via ion migration in and out of the battery electrodes. Therefore, to be able to develop the necessary sodium-based batteries, it is crucial to understand how sodium ions move in the relevant materials. Now, for the first time, scientists at the Paul Scherrer Institute PSI have determined the paths along which sodium ions move in a prospective battery material. They prepared the compound Na0.7CoO2 and investigated it using neutron-scattering at SINQ, the PSI’s Swiss neutron source. It turns out that the paths along which the ions move inside the electrode change with temperature and are directly connected to very small changes in the atomic structure of the material. With these results, one can now start to think of new and specific ways to manipulate the materials through slight changes to their structure or composition, for example – and thereby achieve the optimized material properties necessary for use in future batteries. The results have now been published in the journal Physical Review Letters. 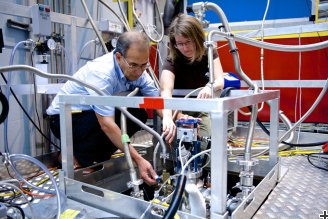 One of the most important scientific problems our modern society faces is how to convert and store energy. Lithium ion batteries are commonly used for energy storage in mobile phones, laptops and increasingly in electric cars. Furthermore, a growing area of application for batteries is the local storage of energy produced in wind turbines or solar plants. But, there are significant drawbacks for using lithium ion batteries: they are rather expensive and in addition the extraction of lithium metal is problematic from an environmental point of view due to its high reactivity and relatively low abundance in the Earth’s crust (only 20 ppm). 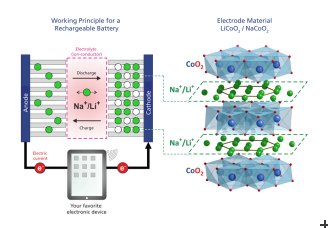 Lithium-ion-battery Working principle of a lithium-ion battery and a future sodium-ion battery (left) und structure of the cathode material (right). The cathode material is composed of layers of cobalt oxide CoO2, with layers of mobile lithium or sodium in between. The positions where the ions can be located in these layers form a triangular pattern. During discharging, the ions in the battery move through the electrolyte from the cathode to the anode while the electrons have to take a detour through some electronic device where they appear as an electric current.

Sodium as alternative to lithium in batteries

One option to avoid these drawbacks might be to replace lithium (Li) with sodium (Na) in electrode materials for rechargeable batteries. Sodium is similar to lithium in terms of its chemical properties, but approximately 1,000 times more abundant in the ground (26,000 ppm) and in the form of salt (NaCl) in normal seawater (15,000 ppm). This makes sodium-based batteries potentially more environmentally friendly and easier to recycle, as well as up to five times less expensive. However, sodium ions are bigger and heavier than lithium ions and nominally the operating voltage is somewhat lower. As a result, sodium-based batteries are initially expected to have a lower energy density (Wh/kg), making them larger than present lithium ion batteries. But this is obviously not a significant drawback for using them in stationary energy storage applications such as batteries storing excess energy at a wind turbine or solar panel.

In both types of batteries, the operating principle is that ions are shuttled between the battery’s positive and negative electrodes during charging and discharging, with an electrolyte serving as the medium for ion transport. In order to develop novel batteries, one has to study the current key-materials and understand the fundamental processes of ion movement on an atomic scale. A research team at the Paul Scherrer Institute in collaboration with researchers from ETH Zurich and Japan (Toyota Central Research and Development Laboratories Inc. and the Comprehensive Research Organization for Science and Society) has now investigated the material Na0.7CoO, which is similar to the most common Li-ion battery cathode material, but where the lithium has been replaced with sodium. It is built up from alternating atomic layers of cobalt oxide and sodium ions. The main goal was to study how the sodium ions move within their layer and how the structure of the material might change during such a process. 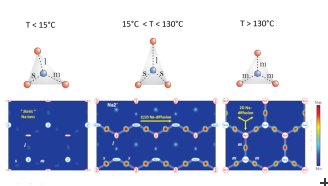 Na layers The figure shows one of the Na layers in the material Na0.7CoO2, visualized using the neutron scattering technique. The paths chosen by the Na ions during the diffusion process appear as red spots. At low temperatures (left) no red spots are visible, indicating that the Na ions are fixed at their positions. Between 15 and 130°C (middle) they move only along 1-dimensional paths corresponding to the shorter Na-Na distances (labeled as 's' in the figure). Above 130°C (right) all Na-Na distances (labeled as 'm') become identical and the Na ions have enough energy to move within the whole layer.

Most studies of ion conduction can only provide approximate information on how fast the ions are moving. In contrast to this, the PSI researchers used neutron-scattering, which is able to visualize the path of the ion movements on an atomic level. It turned out that the conduction path of the sodium ions depends considerably on temperature. «For temperatures below 15°C, the sodium ions can hardly move at all; for temperatures between 15°C and 130°C, they can only move in one dimension along special paths whereas at higher temperatures the ions can move freely within the whole sodium layer,» explains Marisa Medarde, a materials scientist at the PSI and first author of the paper. «The changes in dynamics are connected to slight distortions in the structure of the material: above 130°C, the sodium ions have preferred positions within their layers that are arranged in a triangular pattern. Since the sides of these triangles are identical, hopping from corner to corner costs sodium ions the same energy independent of the direction of the movement. When the temperature decreases below 130°C, the thermal energy of the sodium ions is not enough for such a motion. As a wonder of nature, tiny changes occur in the arrangement of the preferred Sodium positions – one side of the triangles becomes shorter. Hopping between two corners separated by shorter distances costs less energy, so this small distortion makes sodium migration possible at unexpectedly low temperatures.»

Learning to control the motion of ions in battery materials

«The results give us a whole new degree of understanding of how complex the dynamics in these compounds and how small the effects needed to facilitate optimal conditions for the motion of ions are», explains Martin Månsson, a battery and materials researcher at PSI. «This understanding may enable us to learn how to control and optimize the transport of ions in battery materials. This could partly mean substituting one chemical element with another in present materials, applying external pressure or developing completely new compounds with a designed atomic structure.»

In their investigations, the scientists used the Swiss neutron source of the Paul Scherrer Institute (SINQ). Such an experiment involves sending a beam of neutrons through the Na0.7CoO2 sample. Some of these neutrons interact with the sample and change their direction of flight; they are scattered. The number of neutrons deflected in each direction contains information on the inner atomic structure of the material: well-defined peaks appear for particular directions corresponding to regular arrangements of the atoms and ions in the material. In this case, one of these peaks clearly divides into two peaks below 130°C. This means that the distances between the preferred sodium positions are no longer equal and correspond to a slightly distorted triangular pattern within the ion planes. Such a subtle distortion of the atomic structure seems to be the key to opening the ion diffusion channels in this material.

The Paul Scherrer Institute develops, builds and operates large, complex research facilities, and makes them available to the national and international research community. The Institute’s own key research priorities are in the investigation of matter and material, energy and the environment; and human health. PSI is Switzerland’s largest research institution, with 1500 members of staff and an annual budget of approximately 300 million CHF.