True change of symmetry or ricochet? 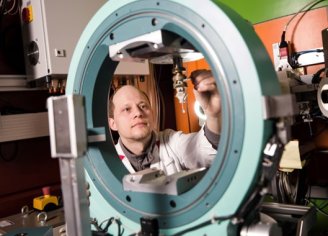 Ba2CoGe2O7 belongs to a new class of multiferroics, the so-called “four-coloured media”, which show quadrochroism. That is, they have four different light transmission (colours) that can be controlled by the direction of an applied magnetic field. In general, multiferroics are materials, in which several ordered states on the electronic level exist simultaneously and interact with each other. They change their magnetic properties when applying an electric field, and vice versa. Worldwide they are currently studied very intensively, because they can be used versatilely as sensors, actuators, storage media and spintronic components.

The various atoms and their arrangement to one another determine the physical properties of all materials. It is therefore very important for practical use of a new material, to accurately determine its atomic arrangement and assign it to one of the 230 possible space groups of symmetry. Crystallographers usually use X-ray diffraction for that: They hit the crystal with X-rays, which are then diffracted by the planes of atoms within a crystal. From the scattering pattern, scientists can determine the atomic arrangement in the crystal, their symmetry relationship and thus to solve its crystal structure.

However, the results are not always clear. Sometimes the so-called “forbidden” peaks appear in these diffraction patterns. There are two main explanations for those peaks: They can be an indication of a lower symmetry, so for example, an orthorhombic crystal structure instead of a tetragonal one. But they also can be caused by the so-called Renninger effect – also known as “Umweg” or detour excitation. This arises because the radiation beam is diffracted several times within the crystal and appears as “ricochet” in the wrong place.

Distinguishing between the “right” and the “wrong” peaks is often difficult. Only rarely scientists use neutrons for that, although they are quite convenient to study bulk materials because of their great penetration depth. Dr. Andrew Sazonov (RWTH Aachen/JCNS) along with his colleagues at MLZ discovered the secret of “forbidden” peaks in the multiferroic compound Ba2CoGe2O7. He used hot neutrons (short wavelength) of the HEiDi (RWTH Aachen/JCNS) and cold neutrons (long wavelength) at the MIRA (FRM II/TUM). The scientists came to a clear conclusion: The forbidden peaks in Ba2CoGe2O7 earlier detected by X-rays are actually the detour excitations. The real symmetry of Ba2CoGe2O7 at room temperature thus corresponds to a tetragonal structure and therefore its magnetoelectric properties can also be determined accordingly. Dr. Andrew Sazonov adds his comment: “The combination of the neutron diffraction techniques and the software program “Umweg” at MLZ is a big step forward to improve neutron studies on many other highlighting materials, in order to answer the often difficult question of their real symmetry. That’s a great simplification.”