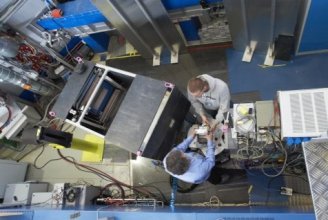 Thin film systems with controlled interfaces are very interesting as they can give rise to exotic physical phenomena and novel functionalities. Coupling between superconducting and ferromagnetic states in hybrid oxide heterostructures is a topic of intense basic research. Synergy between superconducting and magnetic orders turns out to be impossible due to the fact that the magnetic exchange field in a ferromagnet tends to spin-polarize electrons and breaks apart the opposite-spin singlet Cooper pairs (the hallmark of superconductivity). A combination of both is possible only at engineered interfaces, wherein the superconductor affects the ferromagnetic order forming a magnetic “dead layer” via pi-state in the ferromagnet side or via triplet-pairing induced in the superconductor side: popularly known as the so called “proximity effect”. Scientists around the world have observed a number of exotic phenomena in such thin-film systems. So far, however, no one has studied what happens if in between these two layers, an insulator material is interleaved.

A team of physicists from the Bhabha Atomic Research Center (BARC) Mumbai and the Physics department of TU Munich, in collaboration with Forschungszentrum Jülich faces up to this question. For this they have placed a thin layer of SrTiO3 as an insulator in between a superconducting layer and a ferromagnetic layer and studied this three-layer hybrid system. The neutron reflectivity measurements on this system were performed at the reflectometer MARIA which is particularly suited to investigate thin buried magnetic layers with polarized neutrons.

The team of scientists found a surprising result: even across the insulating oxide layer the superconductor influences the magnetization of the ferromagnetic layer. They could see that a layer with a reduced magnetization at the interface is created at the ferromagnetic interface. The thinner the insulator layer, the thicker is the magnetically depleted layer. From these results, the researchers conclude unambiguously that the Cooper pairs of the superconductor have managed to tunnel through the insulating oxide layer which induces the lowering of the magnetization in the ferromagnet side. Amitesh Paul, one of the coordinators of this project from MLZ, who has also performed the experiments, is delighted with this result: “We are a big step forward in exploring the fundamental aspect of superconducting order parameter tunneling and consequent magnetic modulation in these hybrid heterostructures. In the future, one can use even better local imaging techniques in combination with scattering techniques for a deeper insight into the phenomenon”.