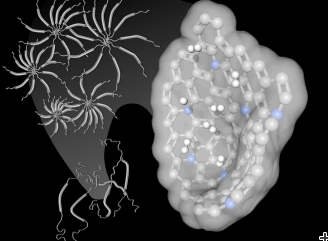 The synthesis of stable and cost-effective new materials is paramount for the development of advanced technologies. At the same time, new and exciting insights can be made about material properties to better inform their development in the future. In a new study published in Carbon, researchers from the Institut Laue Langevin (ILL) together with colleagues from Universidad de Antioquia, Colombia, and research centres around Europe used instruments at the ILL to test a new carbon-based material, named D-96-7, and found exciting diffusion capabilities that may have applications in the world of sustainable energy provision.

Created using chemicals commonly found in the lab by the Colombian co-authors, D-96-7 is a porous carbon material made up of high proportions of nitrogen. Such nitrogen-doping can affect the physical properties of the material, and it was brought to the ILL in Grenoble to investigate these. Structural analysis and diffusion dynamics were measured, in tandem with a sample of frequently-studied exfoliated graphite for comparison.

The researchers were surprised to find that the surface diffusion of the material behaved very differently to the sample exfoliated graphite. Typically, diffusion, the speed of a particle’s movement on a surface, is a thermally activated process. The higher the temperature, the faster a particle is able to move. At lower temperatures, the particle does not have the energy required – also known as activation energy – and slows down or stops as a result.

Interestingly, the researchers found that low temperatures had little effect on D-96-7’s rate of diffusion. Molecular hydrogen was still able to move through the material easily, much like the movement of a liquid, and there was very little change in its diffusion rate from high to low temperatures, compared to the sample and other carbon-based materials.

This observation led to a new hypothesis – that the diffusion rate is not only determined by the porosity of the material, but also its curvature. Dr Peter Fouquet, Research Scientist at the ILL, explains in more detail:

“All carbon-based materials are mostly the same chemically but we see several orders of difference in diffusivity – why? Some suggest pore size but there are microporous materials that have similar rates of diffusion as their macroporous counterparts. Our working hypothesis is that the shape and curvature of the material is much more important. In our structural studies, we can see that on an atomic level the material is curved, more like a buckyball than flat sheets, likely due to the addition of nitrogen. This could be why the hydrogen does not get trapped and slow down.”

Understanding this better can have important consequences for alternative energy. For example, hydrogen is seen as one of the most promising sources of renewable energy, but challenges faced in its storage, transportation, and production are yet to be overcome before its full potential can be realised.

The production of hydrogen gas and the generation of electricity require the use of catalysts, such as platinum metal, which are in most cases deposited on porous carbon materials as support. It is clear that the porosity and the hydrogen conduction properties of the support have a critical impact on the performance of the catalysis. Extensive research has been conducted to create affordable and abundant catalyst support materials, and D-96-7 can prove to be a close competitor. Its high surface density, as evidenced by its mesoporous structure, combined with its essentially barrier-free mobility will permit molecular hydrogen to behave like a natural liquid, and potentially improve the performance of the catalyst assembly. For the same reasons it might also be used for hydrogen storage.

Not only is there potential for D-96-7 to be a suitable starting point for more efficient catalysts, but also for further understanding of the structure of carbon-based materials and their physical properties. There is still some way to go before an ideal material for hydrogen storage or catalysis is synthesised based on this material, but in the meantime, neutron science will most certainly be a part of it.

“Neutrons were especially useful for this type of experimentation”, says Fouquet. “It’s rare to have techniques that are able to look at the diffusion dynamics on the pico- to nanosecond timescale. Unlike other techniques, such as X-rays, hydrogen is highly visible in our experiments and we have a high degree of confidence in our findings.”

The next steps for the team will be to conduct the same measurements on the different carbon-based materials that the team at Universidad de Antioquia have created. There is clearly more room for specialist carbon material, and it is an exciting time for the world of materials science.