Uncovering the effect of pesticides on the waxy layer of plants 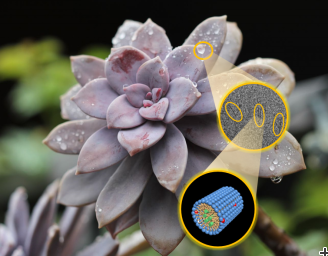 Uncovering the effect of pesticides on the waxy layer of plants An image showing plant waxes (green) solubilised inside a micelle in order to allow for the release of pesticides (red), provided by Xuzhi Hu from University of Manchester​. Credit: ISIS
A team from the University of Manchester, ISIS and Syngenta, have been using a combination of analytical techniques in order to study the efficiency of pesticides in the development of agri-sprays, which are commonly used in the agricultural industry.

Increasing pesticide efficiency not only reduces costs, but also reduces damage to plants, the ecology and the living environment. Agricultural adjuvants, such as non-ionic surfactants, are commonly added to pesticides such as agri-sprays in order to maximise pesticide efficiency by enhancing the pesticide uptake by plants.

Do you want to understand more about surfactants and how we can investigate them using neutrons? Have a look at our explanation of their role here.

Surfactants decrease the surface tension of the droplets in the agri-spray so that the contacting area is increased on the spraying surface. Surfactants can also absorb onto, and then penetrate into, the plant surface creating a pathway for pesticides to diffuse into the plant itself. As a large proportion of pesticides have an extremely low water solubility, surfactants can also be used to improve their mobility in the system by solubilising the pesticide molecules. This creates a structure known as a micelle, which acts as a capsule containing the pesticide (read more about micelles here).

When sprayed, the micelles come into contact with the thin wax layer on the outer surface of the plant. These waxes mainly consist of alcohols and esters with very long hydrocarbon chains, making them predominantly hydrophobic, or water repellent. However, their polar alcohol and ester end groups offer some weak hydrophilicity, or water attraction. The fact they contain both of these kinds of species, their amphiphilic nature, may explain why the micelles take up wax molecules from the plant when they land on the surface. However, there is little common knowledge about the exact molecular processes involved and the impact on the pesticides when this happens. 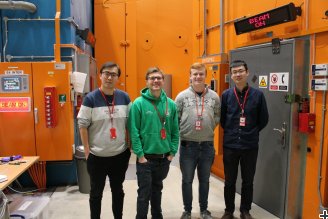 An image showing plant waxes (green) solubilised inside a micelle in order to allow for the release of pesticides (red), provided by Xuzhi Hu from University of Manchester​ Researchers from the University of Manchester at the instrument Offspec at ISIS Neutron and Muon Source in December 2019. From left to right: Zongyi Li, Sean Ruane, Peter Hollowell and Xuzhi Hu. Credit: ISIS

SANS (small-angle neutron scattering) has a wide range of applications and is capable of providing information relating to detailed structural changes in aqueous solution. Combined with other techniques such as proton nuclear magnetic resonance (H-NMR) and cryogenic transmission electron microscopy (Cryo-TEM), SANS techniques using the LOQ diffractometer here at ISIS were used to examine the changes in micelles saturated with fungicide, before and after wax solubilisation.

“ISIS provides users with state of the art instruments that can provide us, as researchers, methods to probe deeper into our pesticide delivery and uptake system”, said Xuzhi Hu, from the University of Manchester. “Our research is driven by both academic and industrial relevance which is enabled by the ISIS research facility; their incredibly helpful support staff and world leading experts provide a service that is second to none.“​

This study was able to confirm that the micelle nanostructures were heavily influenced by wax solubilisation and pesticide release, as well as the effect of temperature on pesticide and wax solubility in the micelles.

These initial findings have shown that agrochemical sprays are capable of dissolving the waxy layers on leaves, which may trigger surfactant micelles to release pesticides. In December, the team returned to ISIS to carry out further studies on OFFSPEC, a reflectometer, in order to understand how structural features across reconstructed wax films are affected by exposure to surfactants. This study might help us to understand the structural features of the underlying layers of the plant cuticles, thereby furthering our understanding of pesticide uptake by plants.

Would to know some more about surfactants? ​Have a look at our explainer article: https://www.isis.stfc.ac.uk/Pages/SH19_Surfactants.aspx