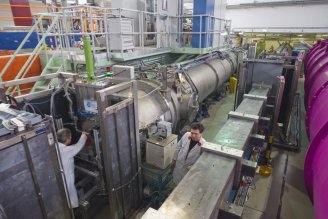 CO2 acts as a greenhouse gas in the atmosphere and is considered the main cause of global warming. Large volumes of the gas are produced by power plants burning fossil fuels, by the mining industry and in certain industrial processes. In order to avoid the gases escaping into the atmosphere, it is possible during these processes to separate out and compress CO2 using a variety of methods. To ensure that it stays out of climate circulation in the long-term, it is essential to be able to store it safely over thousands of years.

Storage in porous rock layers deep underground is a favoured solution. Before this can be achieved, there are many questions to answer, above all, how long CO2 can remain stored in the rock. By pumping it down into the rock, the liquefied gas displaces the saline solution that previously filled the pores of the rock and partly dissolves in it, so producing acidic solutions. These are lighter than the original liquid and thus try to find a way to the surface. Thick layers of non-porous stone should prevent leakage, but the question is, how long will they resist the acids? In the case of the natural reservoir in Utah, current experiments have found the top layer to be stable for at least 100,000 years, or ten times as long as once thought.

Up to now, the examined rock layer sealing off the stores of gas from the surface has become porous only to a depth of around seven centimetres. The acids have washed out the more readily soluble minerals over time. Previous studies had predicted that the acids would damage the rock to a depth of several metres over such a long period of time. The researchers found out that this discrepancy has come about by chemical reactions between the rock and the liquids, which were not taken into account in previous studies. Rock containing a high component of clay appears to drastically reduce the progression of corrosion. The scientists concluded from this that the composition of the surface layer and the CO2 solutions as well as their chemical reactions with each other must always be considered separately when assessing how far a geological formation is capable of storing CO2.

Important information about the changes in the pore network structure along the drilled sample was obtained using the neutron small angle scattering facilities at the Jülich Centre for Neutron Science (JCNS) at the Heinz Maier-Leibnitz Zentrum (MLZ) in Garching near Munich. “The combination of a “classical pinhole” small angle neutron scattering (SANS) instrument and a mirror-focusing, very small angle neutron scattering (VSANS) instrument enables the analysis of the structures of numerous materials on a scale ranging from the subnanometre to over a dozen micrometres”, explained Dr. Vitaliy Pipich, Instrument Scientist at the Jülich Centre for Neutron Science. “Small angle scattering experiments are therefore eminently suited to determining the changes in the pore structure and thus the permeability of the rock.” In future JCNS, together with the Faculty of Georesources and Materials Engineering at RWTH Aachen, which also took part in the experiments, is aiming to develop an even closer collaboration with energy research using experiments with neutrons.