Unexpected behaviour during charge and discharge of Li-ion batteries

Nowadays lithium ion batteries are commonly used as storage media in portable electronic devices like laptops, smart phones, cameras, etc. But their field of application is also expanded to electro mobility and storage solutions for renewable energies. Though lithium-ion technology is promising to improve the performance of current devices, there are still some issues to be solved e.g. concerning safety and rate capability at different operating temperatures. 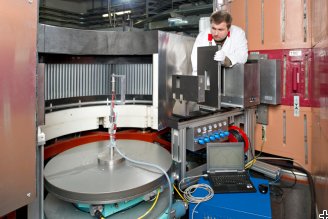 Limiting the cell lifetime these factors are most important for economic efficiency of electric vehicles. In this sense the deeper understanding of the mechanisms of lithium intercalation into the electrode materials during charge and discharge will be advantageous.

Anatoliy Senyshyn (FRM II/TUM) together with colleagues from TU Darmstadt and KIT/IAM-ESS Karlsruhe, therefore, studied the charge and discharge behaviour in more detail using high-resolution neutron powder diffraction at the instrument SPODI. For a 18650-type cell (e.g. standard laptop battery) based on a LiCoO2 cathode and a graphite anode they observed a previously unknown signature inside the diffraction pattern related to features occurring during the intercalation of lithium into the graphite anode, which is the most commonly used anode material for state-of-the-art lithium-ion batteries. Contrary to the accepted opinion it has been found, that only stage 1 and stage 2 of the lithium intercalated carbons, namely LiC6 and LiC12, exist in a form of well-defined stages, whereas further lithium extraction does not result in a clear stage formation but in a quasi-continuous LiC12-to-carbon transformation. In addition weak traces of structural modulations have been found within graphene sheets of lithium intercalated carbons at low lithium concentrations. Starting from a standard A-B stacking of neighbouring graphene layers these modulations were attributed to a twisted graphene bilayer behaviour forming cavities/areas of A-A stacking favourable for lithium hosting. A continuous sliding of neighbouring graphene sheets yields a different size and amount of A-A type cavities varying with the state-of-charge of the cell. At a certain lithium concentration inside the anode the structure transforms to the well known stage 2 (LiC12).

The observed twisted bilayer behaviour requires a reconsideration of the lithium intercalation/extraction into graphite for cells close to the discharged state. This deviation from the commonly accepted staging behaviour may have a considerable effect on the point of view of critical cell properties like C-rate, low-temperature performance, depth of discharge etc.