User research at BER II: Lupin roots observed in the act of catching water from soil – so far too quick for 3D views 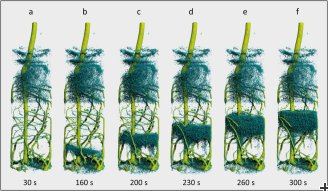 Sequential tomography of a lupin root Sequential tomography of a lupin root (yellowish green) after deuterated water (D2O) was introduced from below. The rising water front (H2O, dark blue) is displaced by the D2O from below over the course of time. The complete sequence can be viewed as a video. Created by Christian Tötzke © University of Potsdam

Lupins not only produce colourful blossoms but also nutritious beans rich in proteins. Just how these plants draw water approaching their roots in soil has now for the first time been observed in three dimensions by a University of Potsdam team at the HZB-BER II neutron source in Berlin. To accomplish this, they worked with the HZB imaging group to improve the temporal resolution of neutron tomography more than onehundred-fold so that a detailed 3D image was generated every ten seconds. This ultrafast neutron tomography is generally suitable as well for analyses of dynamic processes in porous materials.

Soil scientists led by Prof. Sascha Oswald from the University of Potsdam regularly conduct experiments at the BER II neutron source. This is because neutrons are superbly suited for observing the transport of water in soil and plant roots. In addition, the scientists also use deuterated heavy water that can be differentiated from ordinary water clearly by neutrons. At least an hour of acquisition time was previously necessary to generate a detailed three-dimensional mapping of the water distribution using neutron tomography at the CONRAD-2 imaging facility. The scientists have now broken with the paradigm that an object should move as little as possible during the recording process, as is also the rule in photography. They rotated the lupin plants continously while a successive series of images with extremely short exposure times were taken. The team is now able to conduct this type of 3D mapping during a period of only ten seconds thanks to specific technical modifications in CONRAD-2 carried out by HZB experts Dr. Nikolay Kardjilov and Dr. Ingo Manke.

These modifications enabled the researchers from Univ. of Potsdam to observe for the first time in 3D how water rises upwards in the soil and thus how the roots absorb it. “At this temporal resolution it had only been possible thus far to look at the sample cross-section radiographically, i.e. in 2D”, explains Dr. Christian Tötzke, first author of the study that has now been published in Scientific Reports. The findings extend our understanding of the interactions between roots and soil, which could even affect breeding and cultivation of these kinds of agricultural crops. And the new recording technology, which is a good 100-times faster than before, could also enable fast processes in other samples to be observed in real time, such as in fuel cells, batteries, and construction materials.