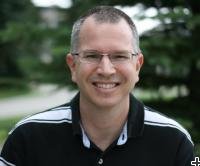 One University of Calgary geoscientist is demonstrating how to use neutron beams to determine the manner in which the pores in shale deposits store oil and gas—knowledge that could be used to select the best extraction method for maximizing oil and natural gas production, as well as to reduce emissions by helping researchers to better understand how excess carbon dioxide could be stored in shale.

Much of this new research is being undertaken by Professor Chris Clarkson, a geoscientist whose work is sponsored by Shell, Encana, and the corporation Alberta Innovates Technology Futures. Clarkson enjoys borrowing ideas from other fields and applying them to the oil and gas industry in unconventional ways—and helping his fellow scientists do the same.

For instance, his demonstration of how neutron beams can be used to study shale deposits has captured the attention of scientists around the world. Since he published on the topic in the January 2013 edition of the scientific journal Fuel (DOI:10.1016/j.fuel.2012.06.119), which reports on a variety of fuel-related innovations, Clarkson’s research has been cited more often in a five-year duration than any other paper published in that journal in the past 20 years. That is no small feat, given that Fuel ranks in the ninety-fifth percentile of all journals in its subject area (as measured by Scopus’s CiteScore 2016).

The appeal of Clarkson’s research is unsurprising, as it aims to solve some mysteries about shale that have puzzled the industry for decades. For instance, much of the oil and gas in shale deposits is ‘locked’ away inside the rock, but it isn’t always easy to determine what locking mechanisms are present in a given deposit. Engineers need to know precise details about exactly how the resources are confined inside a deposit to decide which extraction method holds the key to releasing the most oil and gas. 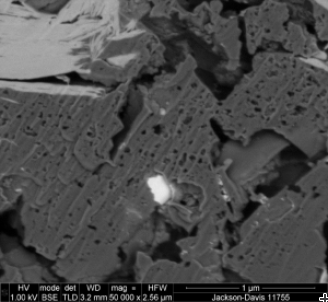 Clarkson’s work is also significant in terms of developing a technique to measure how much oil or gas is actually extractable from a shale deposit, which would help reduce the large financial risks inherent in extraction projects. This line of research would also provide some insight into how much carbon dioxide gas could be stored in shale deposits, which would ultimately help companies to make better decisions about how to reduce the environmental impacts of their activities.

Shale deposits are particularly complex to study because they are often full of interconnected pores, like a sponge. These pores, which naturally store oil and gas, can be incredibly small—micrometre-sized or even smaller, down to the nanoscale. Some are so tiny, in fact, that they’re not much bigger than the molecules of oil and gas they contain.

Yet the ability of these nanoscopic pores to store gas – whether natural gas to be extracted or carbon dioxide to be sequestered underground – should not be underestimated. Storage of the gas within these tiny holes is mainly driven by adsorption, which means that the gas adheres to the surfaces of the rock. Therefore, shales with a greater surface area will store more gas. This is important for fuel extraction or carbon sequestration because every shale deposit stores a different amount of fuel based on its unique porosity profile. For instance, “A shale with 10% porosity with micrometre holes may have an accessible surface area of about one square metre per gram,” explains Clarkson. “But if the holes are nanometre-sized in a shale with the same porosity, then the surface area could be hundreds of times greater.”

Furthermore, the gas adsorbed in these tiny holes will have a high density—near that of a liquid, in fact—so the shale’s storage capacity is increased even more.

Conventional methods to examine the pores in shale deposits in advance of extraction have some pretty significant limitations. For example, “Some can only detect pores larger than three or four nanometres in diameter, which could mean we often miss a large portion of the surface area,” Clarkson notes.

So Clarkson turned to neutrons to find a more reliable way to characterize the pores in shale deposits. “Using neutron beams, we can detect pores smaller than a nanometre, and ensure that we include the full range of pores in our determination of the surface area,” he explains.

In addition to having the ability to probe shale samples to determine the size and distribution of the pores, neutron beams can also provide information about the pores’ geometric shape (i.e., open or closed formations). While many conventional methods can only detect open pores, neutrons can detect both open and closed ones, thereby providing more accurate surface area information overall.

“Another valuable feature of using neutron beams is that, during our measurements, we can hold the shale under the same high pressures of methane gas, and at the same elevated temperatures, that it would experience underground,” says Clarkson. “That way, we know our results are realistic.”

To date, Clarkson has published three research papers that demonstrate the capability of neutron beams to accurately and non-destructively assess the porosity of shale deposits. His collaborators on these studies include researchers from the University of British Columbia, the Indiana Geological Survey, and Oak Ridge National Laboratory (which also supplied the neutron beams).

Notably, the results of these studies all showed good agreement with the data obtained from conventional examination methods. For instance, Clarkson’s neutron beam experiments detected the same larger pores that the conventional methods detected, while also providing previously missed details about the nanoscopic pores. This positive overlap is of crucial importance, as it provides high confidence in the accuracy of the results. Clarkson’s team was also able to make some other observations about the pores that affect the total accessible surface area of a deposit ­– details that were missed by conventional methods.

There is still work to do before Clarkson’s neutron data can be applied by the industry to make decisions about storing carbon dioxide or extracting resources. For instance, further studies are needed to gather enough scientific data to establish the correlations between the characteristics of the pores and the total gas production or storage capacity. Other factors, such as the organic and mineral content of the shale, also have to be taken into account. Regardless, Clarkson is passionate about the future prospects of using neutron beams to assess the potential of shale deposits.

“Over time, I’ve convinced my industry colleagues that there’s a lot of long-term value in this research,” Clarkson says. Indeed, researchers around the world have already begun adopting his technique, using neutron beams to examine shale deposits across North America and China to provide insights about oil and gas extraction and carbon dioxide sequestration.