How pure do atoms vibrate in a metal? Scientists at the Max Planck Institute for Iron Research and the Technical University of Munich (TUM) have investigated this question with the help of neutrons and theoretical calculations. Their results, which also have effects on the calculation of thermal conductivities, have now been published in the renowned journal Physical Review Letters. 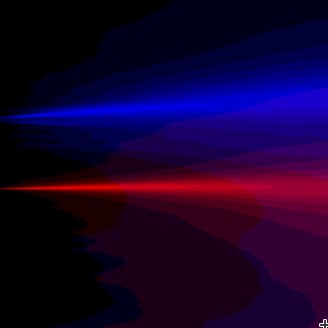 Vibratinglike a drum or tuning fork According to the previous perturbation theory, the frequency width of the oscillations (energy E) would have to increase linearly with increasing temperature T. The anharmonicity, however, causes it to increase in the blue and red data much more strongly at high temperatures.

If you look into a crystal at the atomic level, physics expects that atoms oscillate pure, as pure as the sound of a tuning fork. However, in extreme cases they actually vibrate rather impurely, like a drum that is beaten. A drum oscillation is short, while the tuning fork seems to oscillate forever. “At high temperatures the idealized idea is not correct, even if it is easy to calculate”, explains Dr. Michael Leitner, main author of the TUM publication.
This deviation from the idealized idea is called the anharmonicity of phonons. It alone is the reason for both the thermal expansion of materials and the finite thermal conductivity of crystals. A microscopic theory of phonon-phonon scattering has existed since the 1960s and is applied to the theoretical prediction of thermal conductivities of materials by widely used software packages.

The scientists led by Dr. Jürgen Neuhaus from the MLZ took pure aluminum as a “simple metal” with an exemplary character, as Leitner says, to investigate this anharmonicity. The TUM scientists measured the lifetime of the oscillations, i.e. whether they “sound” more like the sound of a drum or a tuning fork, with the help of neutrons on the three-axes spectrometer PUMA. At the same time, their colleagues from the Max Planck Institute used enormous computational effort to calculate the same lifetime without simplifying assumptions.

“This is one of the first theoretical and experimental investigations to show that the previous standards are not applicable in this way,” says Michael Leitner. Particularly at the temperatures around the melting point of aluminum, at approx. 630°C, the displacements of the atoms is so large that the theories and calculation bases for thermal conductivity developed for low temperatures are no longer suitable. In their publication, the physicists present a different approach to calculating the phonon life times that is more suited to the situation.

Further experiments with other metals will show whether even the existing software for calculating thermal conductivities has to be rewritten. At higher temperatures, Leitner suspects, this may well be the case.