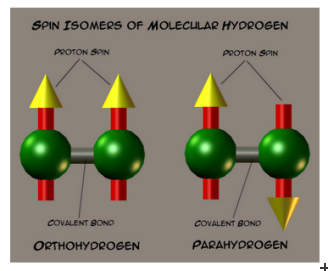 A conversion that happens inside a hydrogen molecule has been studied with an unprecedented level of detail, giving an insight into how this conversion can be maximised, with implications for neutron sources, engineering and industry.

Using the IMAT beamline, complemented by additional measurements on the VESUVIO spectrometer, scientists from ISIS have been able to study changes inside hydrogen atoms. Molecular hydrogen (H2) is made of two hydrogen atoms, each of which has a nuclear spin of one-half. The spins of these two atoms can be pointing either in the same direction, forming ortho-hydrogen (oH2), or the opposite direction to each other, forming para-hydrogen (pH2).

At room temperature, there is usually about three times as much hydrogen found in the ortho- form than in the para- form. However, at low temperatures, a natural conversion occurs from the ortho- state to the para- state because of the difference in their energies: an ‘ortho-para conversion’. 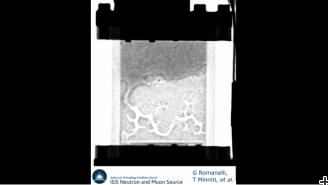 This conversion has practical consequences on the efficiency of liquid hydrogen storage, as the energy released in a conversion event causes the evaporation of the neighbouring molecules in a process referred to as H2 boil-off. For neutron sources, such as ISIS and the European Spallation Source in Sweden, where they use para-hydrogen to optimise experimental performance, a fast ortho-para conversion is crucial.

As well as being a key beneficiary in the conversion of hydrogen spins, a neutron source such as ISIS provides the ideal technique to study them. Neutrons can penetrate deep into bulk materials without damage, so the scientists can measure the samples throughout an experiment as the changes are happening. Neutrons also interact very differently with oH2 and pH2, enabling the scientists to tell them apart and characterise the composition of the hydrogen in the samples being studied.

The group of researchers was able to study the conversion in liquid and solid hydrogen, and in the presence of nanoparticles of iron oxide, Fe2O3­­, acting as a catalyst. This was the first time measurements like this had been taken with such a high level of simultaneous spatial and temporal detail, as shown in the video below.

They found that, under conditions similar to those encountered in industrial and engineering applications, the rate of conversion depends critically on the distribution of the catalyst and on how the gas is supplied. The newly formed para-hydrogen can effectively poison the catalyst by preventing access to it for further otho- molecules.

Their results suggest that, for industrial applications, positioning the catalyst over a solid support with a honeycomb structure could provide an increase in efficiency and reduce conversion time by allowing the hydrogen to flow through the tunnels.

“We have tackled an in-house challenge, the optimisation of para-hydrogen levels in our neutron moderators, using our own capabilities and instruments.” Beamline scientist Giovanni Romanelli explains; “I am very grateful to the several people from different groups at ISIS who helped with the experiment and shared the interest in the results. Most importantly, during this learning exercise, we have pushed the boundaries of applicability of our instruments and techniques a bit further in the direction of existing needs of our diverse user community.”