Researchers from the Paul Scherrer Institute (PSI) have developed a coating technique in the laboratory conditions that could raise the efficiency of fuel cells. The PSI scientists have already applied to patent the technique, which is suitable for mass production.

Researchers from the Paul Scherrer Institute (PSI) have developed a coating technique in the laboratory that could raise the efficiency of fuel cells. Fuel cells generate electricity from hydrogen and oxygen. The gases are transported to the cell’s electrodes from the outside. However, on their way to the electrodes, the gases encounter liquid water that is produced constantly in the fuel cell and should flow out of the cell. When too much water accumulates, the gases flow more slowly, thus limiting the generation of electricity. “Our newly developed coating ensures that the liquid water and the gases flow through the porous materials in the fuel cells using separate channels. This improves the performance and the stability of the fuel cells”, says the head of the study, Pierre Boillat from the Electrochemistry Laboratory at PSI.

Fuel cells convert the chemical energy contained in the gases into electricity. The electricity produced can be used, for example, to power an electric car. The only chemical product of the reactions taking place in fuel cells is water. The “exhaust gas” of a fuel cell car thus only contains harmless water vapour. Fuel cell cars ready for series production have been available since 2013.

But researchers around the world continue to work on raising the efficiency of fuel cell systems and lowering their costs. One important aspect of this work is the removal of liquid water from parts of the fuel cells where it is undesired because it disrupts the flow of the gas. For example, water gathers in the pores of what is referred to as the gas diffusion layer, a layer generally consisting of carbon fibre materials, which among other things ensure transportation and fine distribution of the hydrogen and oxygen to the cell’s electrodes. The water that gathers in the gas diffusion layer obstructs the flow of the gases and therefore restricts the power output of the cell. In commercially available fuel cells, the carbon fibres of the gas diffusion layer are generally coated evenly with a hydrophobic polymer that aims to allow the water to run off more easily. With this coating, the water is distributed arbitrarily in the material, and the gases are often forced to follow tortuous paths through the diffusion layer. As a result, the gases only reach the electrodes slowly, thus reducing the performance of the fuel cells.

The new solution from PSI solves the problem by creating separate “run-off channels” where virtually all of the water collects. In the remaining, dry channels, the gases can then flow more quickly.

A process suitable for mass production 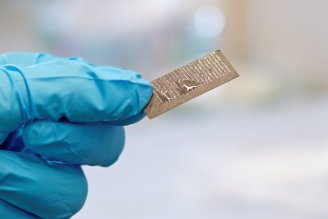 The PSI researchers already knew from earlier experiments that it is not just the amount but also the distribution of the water in the diffusion layer that matters. “Now for the first time we have implemented this idea in a process suitable for mass production”, explains PSI doctoral student Antoni Forner-Cuenca, who carried out the experiments in the laboratory. The concept of the PSI researchers is to partly turn the original, water-repellent polymer coating into a hydrophilic coating along straight paths. The water is basically sucked into those channels, while the remaining areas of the gas diffusion layer remain mostly dry. The PSI scientists have already applied to patent this process. In order to create the water channels, the researchers inserted hydrophilic (water attracting) molecules into the structure of the original polymer. First of all, they had to treat the polymer with an electron beam so that it could bond the molecules to be attached.

This involves transmitting the electron beam through a metal mask or grid to create two distinct areas: In the places where the beam passes through the grid, the original coating can later be changed to create hydrophilic channels. In the places where the beam does not pass through the grid, the original polymer remains hydrophobic. In the area changed by the electron beam, the original polymer coating reacts chemically with particular molecules that make it become hydrophilic, thereby creating preferential pathways for the liquid water to be removed efficiently.

The process developed at PSI for attaching functional molecules with the help of an electron beam is described by the researchers as “radiation grafting”. It is similar to the grafting process common in gardening whereby valuable plants are grafted onto a foreign but robust stem. In this case, the hydrophilic molecules give the base polymer the desired hydrophilic properties.

The scientists were able to demonstrate that the channels they create do in fact suck almost all of the water into them. By contrast, the other areas remain almost completely dry. The proof was provided by images of the gas diffusion layer that the scientists obtained using neutrons from the ICON beamline of the spallation neutron source SINQ at PSI.

*This work was funded by the Swiss National Science Foundation (SNSF)(project number: 143432).

The Paul Scherrer Institute PSI develops, builds and operates large, complex research facilities and makes them available to the national and international research community. The institute’s own key research priorities are in the fields of matter and materials, energy and environment and human health. PSI is committed to the training of future generations. Therefore about one quarter of our staff are post-docs, post-graduates or apprentices. Altogether PSI employs 1900 people, thus being the largest research institute in Switzerland. The annual budget amounts to approximately CHF 380 million.
(Last updated on April 2015)