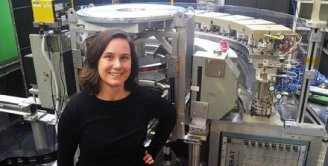 The Australian Institute of Physics (AIP) has announced that Dr Helen Maynard-Casely , an instrument scientist at ANSTO, has been selected as the 2019 ‘Women in Physics Lecturer’.

For the award, Maynard-Casely will present a national series of public and schools lecturers on neutron scattering for the AIP. The tour will take in every state and ACT – with talks in every capital cities and some of the surrounding regions.

Maynard-Casely was selected because of the significant contribution she has made to physics using neutron and X-ray scattering to investigate small molecules and ices under pressure. Her research on the icy moons of the outermost planets with international collaborators has earned her widespread recognition.

As an expert science communicator and regular contributor to The Conversation, Maynard-Casely has contributed almost 60 articles on planetary science since 2012. She regularly undertakes outreach activities to promote physics and encourage STEM participation for ANSTO.

“I am absolutely chuffed about this opportunity and feel very honoured to join the ranks of the female scientists who have preceded me, including astrophysicist Dr Katie Mack and experimental particle physicist Professor Elisabetta Barberio,” said Maynard-Casely.

“It is also a great opportunity to further clarify the misconception that women don’t like physics.”

AIP Honorary Secretary Dr Kirrily Rule, who is also an instrument scientist at ANSTO, congratulated her colleague on the award.

“Helen is a great choice for many reasons. In addition to her skill in crystallography, her significant ability to translate advanced physics ideas to audiences ranging from school children and members of the public to leading science experts, makes her work in planetary sciences accessible to everyone,” said Rule.

Maynard-Casely, who has a PhD in high pressure physics from the University of Edinburgh, is the recipient of numerous awards and invitations, including speaking at the Science Academy’s public lecture series, and two previous state tours of school talks.

The Australian Institute of Physics is dedicated to promoting the role of physics in research, education, industry and the community.