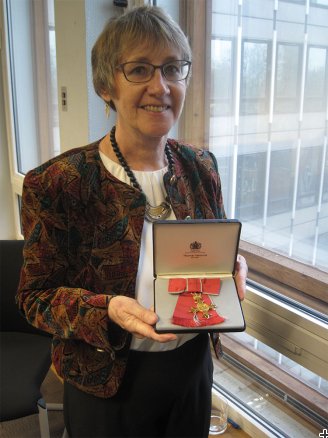 ISIS were sad to announce the death of Dr Uschi Steigenberger OBE, inspirational scientist and former Director of ISIS

After completing her PhD in Condensed Matter in Germany, Uschi joined the Institut Laue Langevin in France before moving to the UK in 1986 to take up a position at ISIS.

Her career at the Rutherford Appleton Laboratory spanned over 26 years, encompassing a number of different roles including: Instrument Scientist, Group Leader, Division Head and Director of Operations, culminating in the position of Director of the ISIS facility.

STFC’s Executive Director of National Laboratories, Dr Andrew Taylor said: “Uschi was a highly valued member of ISIS for many years, without whom many of the achievements that the facility has delivered would simply not have been possible. She was also an outstanding role model for women in science. Uschi was a wonderful colleague and true friend who will be dearly missed.”

Uschi was internationally respected, chairing the Science Council of the Helmholtz Zentrum, Berlin, serving as a member of GSI Darmstadt’s Council and contributing to neutron review committees in Korea, Japan and the USA.

Uschi was a Fellow of the Institute of Physics and, as one of the most senior women working in UK physics, was part of the Institute’s pioneering review of women in the physics workplace, which led to the development of the Juno awards to address the under-representation of women in university physics departments.