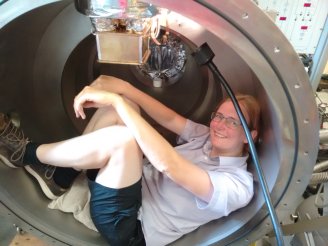 Your studies and scientific field?

I studied Natural Sciences (physical) at Cambridge University, up to MSci level. By my third year, I knew that I wanted to focus on condensed matter, and I thought that magnetism and superconductivity were the most interesting phenomena that were covered in my courses. My MSci thesis work was done in the thin film magnetism laboratory at Cambridge, run at the time by Tony Bland, doing magneto-optic Kerr effect (MOKE) measurements to look at current-induced domain wall motion.

I then did a doctorate in condensed matter physics at, Université Joseph-Fourier, Grenoble, on observations of multiple order parameters in 5f electron systems. 5f electron systems are the actinides on the periodic table, and I spent most of my doctoral studies working on uranium-based magnetic materials. This work was funded by the Institute of Transuranium Elements, Karlsruhe, a part of the European Commission’s Joint Research Centre. I spent the majority of my time at the Institut Laue-Langevin, Grenoble, and so did quite a few neutron scattering experiments, focussing on studies of magnetic order parameters either coupling with each other to give complicated, but fascinating, magnetic structures, or coupling with superconductivity.

Although no longer focussing on 5f electron systems only, I am still pursuing the interplay between different order parameters and how that gives rise to what we call new states in materials.

I started during my doctorate, and haven’t really stopped! I think that I have tried out at least once (not always successfully) almost every type of neutron scattering technique except backscattering and the fundamental physics instruments.

Step by step to my position?

In my final year at Cambridge I knew I wanted to do a PhD, in magnetism or superconductivity, and that I wanted to take the opportunity to live abroad for a bit. After consulting with my supervisor, and responding to a few adverts, I visited four potential supervisors, and eventually decided to move to Grenoble to work with Nic Bernhoeft (CEA Grenoble) and Gerry Lander (ITU Karlsruhe). As I was physically based at ILL, I had a local supervisor there, Arno Hiess, and as I was registered at UJF, I needed a supervisor there, Tim Ziman. Although four supervisors might sound like a lot, for me it worked really well, as they had overlapping but different areas of expertise.

As I was completing my thesis, I decided that I wanted to stick with physics, and that I wanted to try out being based at a university. I also thought that a postdoc in the US would be a good experience, both personally and professionally. I spoke to a few professors there, and went to work for Sunil Sinha at the University of California, San Diego. I did some neutron work there, but a lot more X-ray scattering. I also learned quite a bit about dilution fridges as one of my projects was a study of solid helium.

It was a productive postdoc, and towards the end I was offered a lectureship at the University of Birmingham, UK, which I accepted. I stayed there for eleven years, learning how to run my own research activity, and how to teach undergraduates and graduates, eventually being promoted to a professorship there. From the neutron point of view, I also learned a lot more about small angle neutron scattering from Ted Forgan, who retired a little while after my arrival at Birmingham.

I recently (September 2018) moved to Lund, to help the Physics Department there set up a new area of activity in magnetism and correlated electron physics, which should be an exciting challenge.

Any difficulties because of your gender?

I have not experienced any difficulties because of my gender; I think this owes a lot to the efforts of the various trailblazers of the past.

Percentage of your time for your family/work/you?

This really varies with time. I had a son in 2015, and that made me realise how much of my work I must have been doing at home. At present, I would say my split is 50/50 family/work, with my time for me primarily my bus journey to work.

Who or what is your mentor/greatest inspiration?

I have been lucky to work with some really excellent scientists. I hope that I can follow in the footsteps of people like Nic Bernhoeft, Gerry Lander, Sunny Sinha and Ted Forgan, although they are all rather different in style and approach.

Most challenging thing you have faced in your career?

Managing the commitments I want to make to my work and to my family.

One piece of advice you would give to a woman interested in a career in science?

Ask a lot of questions.