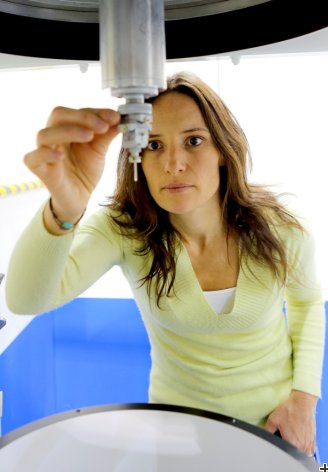 I am a structural biologist – I am interested in the structure of biomolecules, specifically of proteins. My scientific driver is to understand how enzymes (a type of proteins) catalyze difficult chemistry under normal temperature and pressure. The part of an enzyme where chemical reactions occur is called the active site. The active site provides a specific chemical micro-environment that lowers the activation energy of a reaction. I use X-ray and neutron crystallography to get atomic level information on the structure of enzymes. X-rays are excellent at determining the position of the heavier atoms, including carbon, oxygen and nitrogen but fail to provide information on hydrogen atoms which are key to bio-catalyzed reactions. Neutrons see hydrogen and, combined with X-ray data, produce a complete picture. I am particularly interested in enzymes that rely on metal ions to function. These ions center can be easily photo-reduced by X-ray beams. Neutrons have the unique advantage that they do not disturb metal centers.

I first used neutrons during graduate school at the European Molecular Biology Laboratory in Grenoble. I was a student in the Neutron Team and as such had many opportunities to interact with students and scientists at the Institut Laue Langevin (ILL). I used neutron diffraction to investigate the mechanisms of two enzymes: Cytochrome P450cam and Xylose Isomerase. At the time the ILL was operating one of the only three protein crystallography beam lines in the world – with the other two being in Japan. Scientists from Europe and the US came to use this instrument – it was a very inspiring environment for a young scientist. To this day, finding hydrogen atoms in proteins using neutron diffraction remains the main driver of my scientific endeavor. More recently, I have expanded my use of neutrons to small angle scattering to study large biological complexes, including viruses, which are too flexible or difficult to crystallize – crystallization is a pre-requisite for neutron diffraction experiments. I have also had the opportunity to investigate protein dynamics using neutron spectroscopy through collaborations.

Doing my Ph. D. on the ILL campus exposed me at the beginning of my career to various aspects of neutron scattering and instrumentation. The training I received in both biochemistry and neutron scattering has shaped my career.
After graduating in 2004, I became the ILL instrument scientist for the neutron protein crystallography beamlines. In the fall of 2005, the ILL was preparing for a major refurbishment. The reactor would not operate for 9 months. I used this down time to take a sabbatical at Oak Ridge National Laboratory to learn small angle neutron scattering. In 2006, while at Oak Ridge, a joint faculty position between the Neutron Sciences Directorate and North Carolina State University (NCSU) was advertised. The position attracted me as it would allow me to continue to be an instrument scientist, a role I knew, but also give me the opportunity to start my own research lab and to teach. I was appointed joint faculty of Biochemistry in March 2007. As an ORNL staff I have been responsible for developing the neutron protein crystallography program at the High Flux Isotope Reactor. At NCSU, I have started a lab which focuses on understanding the catalytic mechanism of metalloenzymes, including the lytic polysaccharide monooxygenase/cellobiose dehydrogenase redox pair, and cytochrome P450s. In July 2015, I was promoted to the rank of Associate Professor with tenure.

I am especially proud of the work done by my graduate students and post-doctoral researchers in my lab.
I am also very motivated by long lasting collaborations I have with Professor Alice Vrielink in Australia or Professor Carla Mattos in the US.

A full list can be found on Google Scholar.

It varies and, like most, I find family/work/me time challenging to balance without guilt or stress. I don’t want to miss on my kid’s childhoods. I spend as much time with them as my work schedule allows: usually every evenings and week-ends. There are times when I am less present. When I teach at NCSU, I am away from home 3 days a week for 8 to 10 weeks. When the reactor is operating I may have to go to the lab during the week-end. When I attend a conference I may be out for a few days. Despite busy schedules, I feel that, together with my husband who is also a scientist, we have built a strong multi-cultural (US/UK/Fr) family. I take time just for me. I try to swim once a week and I pick up a novel whenever and wherever I have the opportunity to read.

My greatest inspiration is the next set of experiments, with which will come new knowledge. Scientific progress is slow and takes a lot of energy. My husband’s continuous support and his enthusiasm are essential to lift me up when things don’t go as planned.

Teaching and mentoring – I want to get it right for students!