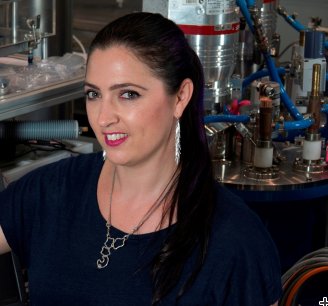 Honorary Professorial Fellow at the Institute for Superconducting and Electronic Materials at the University of Wollongong, Australia

I started using neutron scattering techniques of analysis at the now decommissioned High Flux Australian Reactor (amongst other facilities) during my PhD in 2000, following which I worked at the National Institute of Standards and Technology Center for Neutron Research in the USA. I relocated back to Australia in 2007 where I continued to work in neutron scattering until 2007 where I gained a position commissioning the two neutron powder diffractometers at the new Open Pool Australian Light-water (OPAL) facility, which I now co-operate as an instrument scientist.

Step by step to my position?

Any difficulties because of your gender?

Casual sexism as perpetuated by gender stereotypes is rife. Once noticed, it can be quite overwhelming, and I have taken the approach of always pointing it out. I find that I have to earn credibility, which is never assumed. For example, I have been mistaken for administrative staff, assumed to have a junior role in teams that I lead, and told by new collaborators “wow, you really do know what you are doing”. There is an onus on women to prove ability, and consequentially I feel they usually have to work harder than men.

Percentage time for your family/ work/ for you?

Self doubt. Starting a family. Being denied deserved co-authorship of a high impact publication. The misnomer that experimental science and instruments produce data where they actually produce knowledge. Our industry’s reliance on metrics that inadequately capture impactful and quality science and the overarching culture that supports this.

One piece of advice you would give to a woman interested in a career in science.

Believe in yourself. Do the right thing both scientifically and by the people you work with. Look after yourself – eat well, exercise, be involved in community.