LUND — The European Spallation Source ERIC (ESS) is more than two years into what is a roughly 10-year construction project. The project is in its most intensive phase, marked by a significant ramp-up in personnel, spending, procurement, In-Kind Contributions (IKCs), and is approaching peak on-site construction activity. This accelerated pace will be sustained for the next three years, with the goal to begin commissioning of the Accelerator in late 2019. 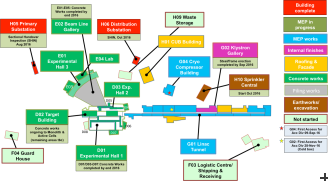 Building construction has moved swiftly and according to schedule, with clear results. Conventional Facilities’ work is approaching 40 percent complete, including structural completion of the Accelerator tunnel and several other buildings. The complex foundation piling for the Target Station and Beamline Gallery is also in the books. Work in each of the Accelerator, Target and Integrated Control System (ICS) divisions is estimated around 20 percent complete, with the construction of ESS as a whole around 27 percent complete.

Significantly, in-kind agreements that formalise the funding and delivery of the facility are now being advanced at a rapid clip. Thirty-nine agreements totalling €172 million were endorsed at the October In-Kind Review Committee (IKRC) meeting. An additional 40 agreements will be reviewed by the IKRC next month, as the October endorsements move to the Council for approval.

“Construction progress is absolute and continues to meet schedule milestones,” said Head of Conventional Facilities Kent Hedin. “We have worked around the inevitable redesigns, setbacks and delays and managed to keep the project as a whole moving forward as planned. We are proud of this, but as stakeholders begin to join the project on-site, we enter a new phase with new challenges.” 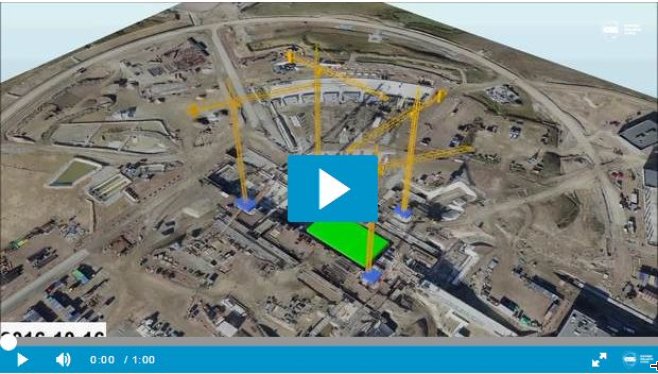 Delivery and Installation of IKCs Begins
This month the project has moved into the first of the so-called technical installations, where specially designed components and systems of the machine will be installed one after the other. The ESS machine includes what will be he world’s most powerful linear proton accelerator, the massive nine-storey Target Station, which houses the 6,000-tonne Target Monolith, and the controls system that keeps it all running safely and reliably.

Technical installations are in many cases based on specifications by European In-Kind Partners and their industrial suppliers, and may be performed by either ESS or the In-Kind Partner. The bulk of the machine design and construction has already been in progress at ESS and its Partner institutions for several years. 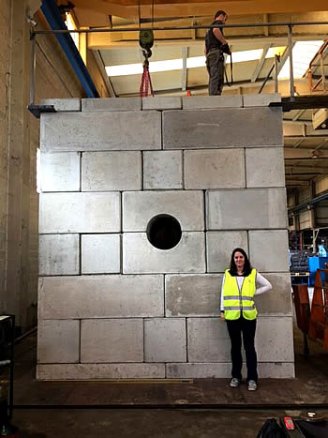 “The initial step of negotiating contracts and getting them signed is also worth mentioning,” noted Technical Director Roland Garoby. “With the many partners that we have, it is not a trivial exercise and it involves significant efforts. This phase is now very advanced, and execution has started for most work packages… The first steps of installation are not necessarily the most spectacular, but they represent the first opportunities for learning on-site.”

Target
The first major in-kind site installation for the Target Station will be the placement of radiation shielding blocks and steel shielding for the Tuning Beam Dump. The Beam Dump is a sort of bullpen for the linac’s proton beam, which is directed there for diagnostics and calibration prior to being redirected to the target wheel to initiate spallation. These 200 specially engineered blocks were delivered to the Lund site this month from Spain.

Installation of the Beam Dump will be done by ESS to the specifications of ESS-Bilbao, which designed the shielding solution as one of their six IKCs for the Target sub-project. The shielding installation, scheduled for late November, should be complete before the new year.

In anticipation of the future development and implementation of the ESS Chip Irradiation (ECHIR) beamline, a few mechanical structures were embedded this month in the basement concrete structures of the Target Station. The underlying concept for ECHIR was designed by CNR, the National Research Council of Italy, in collaboration with ESS.

The next three months will also see installations of specialised structural components and utilities in the Active Cells area of the Target Station. This is where radioactive machine components will be serviced and stored over the life-cycle of ESS. 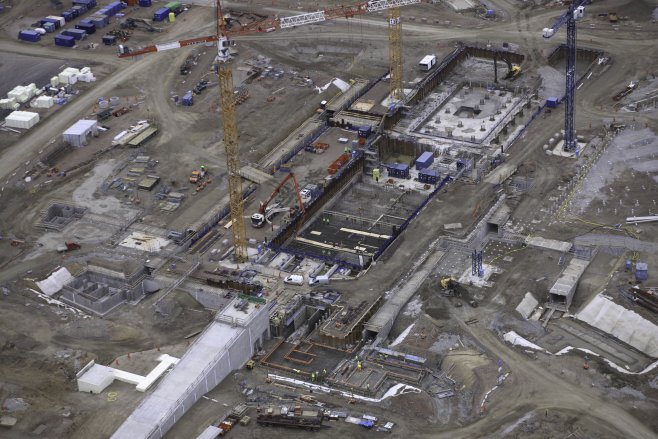 The first large-scale Accelerator installation will begin the first week of December. The Malmö, Sweden company PowerHeat will install warm helium gas piping between the Cryo-Compressor Building and the Gallery Building’s Cold Box.

In January, a full test installation of Stub components will be done by the Accelerator divison. The Stubs are chicaned two-storey spaces that are the interface between the RF power source in the Gallery Building and the linac components in the tunnel. Lots of equipment needs to be precisely placed into a small space at each of the 30 stubs.

As soon as May of next year, ESS will have full access to the Accelerator tunnel, Cryo-Compressor Building and Front End Building, and will be ready to take its first steps toward assembly of the linac.

Technical installations will be done in parallel with ongoing building construction. The progress of each is dependent on the other, creating a complex scheduling and planning matrix developed by ESS with the input of construction partner Skanska, industrial suppliers, and ESS In-Kind Partners, who in some cases will be moving their work on-site or to workshops and labs in the area. 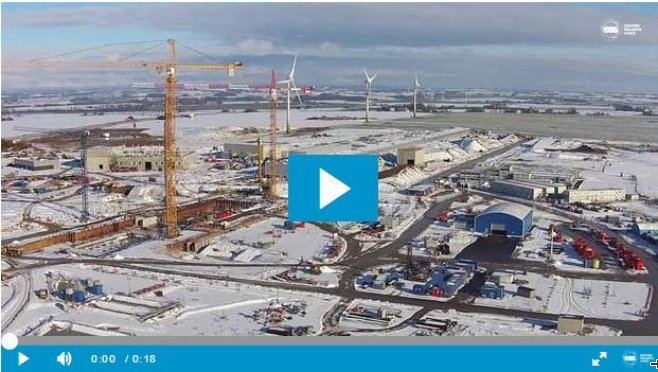 In tandem with the complex logistical planning, ESS is developing an integrated project schedule (IPS) to be released by the end of the year. Led by Schedule Project Manager John Haines, formerly head of the ESS Target Division, the mandate of the IPS is to drive the facility toward early scientific success and to identify cost-saving opportunities along the way. Together with an early focus on operations planning, the new schedule is the first step toward an important shift in the culture of the project.

“The Integrated Project Schedule is a necessary step forward and will guide the different ESS projects toward the centralised goal of early scientific success,” said Haines. “This will help to focus resource planning across the organisation to support each project as it must make difficult decisions regarding scope, cost and schedule.” 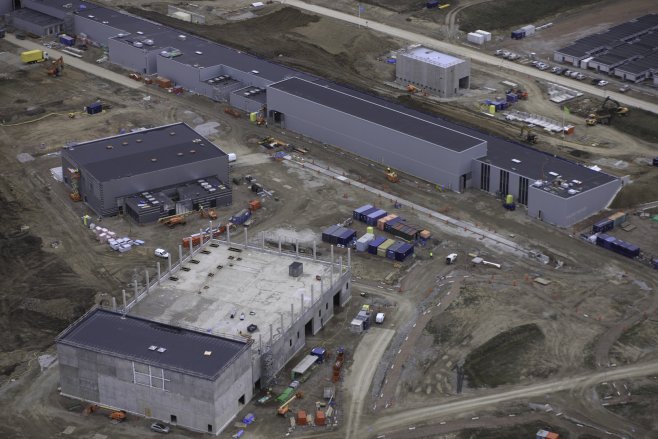 In addition to Haines’ reassignment, Ralf Trant, the former ES&H director at CERN, joined the project in October. Trant is now the Associate Director for Environment, Safety & Health and Quality and will lead the development of a robust and proactive safety culture and the preparation of the next regulatory permit application.

A deputy director for the Machine Directorate has also been named. Antonio Vergara joined ESS in August, and will assist Technical Director Roland Garoby. He has held key positions at the ITER reactor and with CERN’s LHC during the construction, commissioning and operation of these world-leading machines.

Finally, the new Director General for ESS is John Womersley, former CEO of the UK’s Science & Technology Facilities Council (STFC), a key ESS Partner. He took the helm from outgoing DG Jim Yeck on November 1. Womersley has long been involved in the ESS project not only through STFC, but through his work as former chair of the European Strategy Forum on Research Infrastructures (ESFRI), and comes to the project with eyes wide open.

“I chose to come to ESS because I knew it would be a serious challenge and I am thrilled to be here,” said Womersley. “What we see on the site, in the office, at Partner labs across Europe, is a commitment to the success of the project. Now we look ahead to the reality of installing the machine, building the instruments, and planning for the transition into operations and early scientific success.” 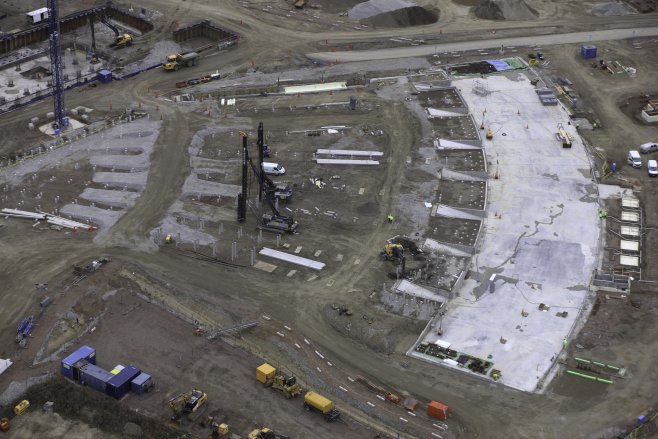