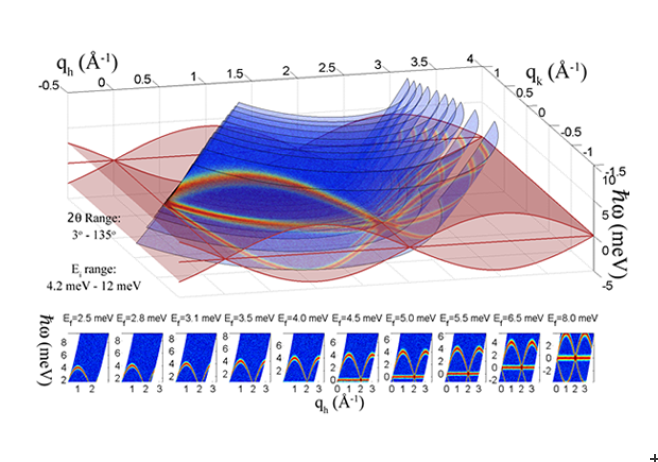 This is the seventh in a series of articles highlighting the instruments selected to enter Phase 1: Preliminary Engineering Design, for the European Spallation Source (ESS) suite of instruments. Twenty-two instruments are anticipated at ESS. The instruments in this series are expected to enter the ESS user program by 2023 and will address the needs of the ESS core user community. They have been selected through a rigorous but inclusive, community-based process that begins with an open call for proposals, moves through reviews by experts inside and outside ESS, and ends with a recommendation to advance into Phase 1 by the ESS Steering Committee. The full proposal and selection process is described here.

Behind The Push To Design and build the European Spallation Source (ESS) has always been the tantalizing prospect of introducing the powerful tool of neutron scattering to scientific fields so far unable to leverage the discipline’s potential. The ESS spectrometer BIFROST will enable experiments in areas of materials science, magnetism, the life sciences, and planetary sciences that previously lay beyond the reach of neutron spectroscopy. By increasing the efficiency of neutron detection, introducing the use of extreme sample environments, and enabling the routine investigation of samples more than a thousand times smaller than those currently studied with neutrons, BIFROST represents a major leap forward for scientific research in Europe.

“BIFROST uses a mix of well-known neutron techniques to perform inelastic measurements, yet in all cases the instrument surpasses the current capabilities of existing inelastic neutron spectrometers by at least two-digit figures—and this is a rather conservative assessment,” explains Philippe Bourges, senior scientist at the French Alternative Energies and Atomic Energy Commission (CEA) and chair of the ESS Scientific and Technical Advisory Panel (STAP) for indirect geometry spectroscopy. “BIFROST will access a range of experiments not doable at present, such as those requiring small samples, extreme sample environments, and detailed neutron polarisation analysis.”

Reflecting the high aspirations of its creators, BIFROST is named after the elusive rainbow bridge in Norse mythology that spans the human world and that of the gods. It is an indirect geometry spectrometer optimised for fast measurements in the horizontal scattering plane, and allows for routine examination of the dynamic properties of small samples within controlled temperature, pressure, and magnetic and other fields. The instrument has been designed to maximise use of the ESS long pulse beam structure in order to maintain good resolution on sample through an innovative “prismatic” analyser system. Ten crystal analysers distribute neutrons scattered at 30 different energies, to 30 different detectors in a single experiment.

“Our claim is that you will be able to do full spectroscopy on samples that are well below one cubic millimetre, which is orders of magnitude smaller than what you can do today,” states Henrik Rønnow, a professor at the Laboratory for Quantum Magnetism at École polytechnique fédérale de Lausanne (EPFL). “It doesn’t sound like much, but in the world of neutron spectroscopy that really is a game changer.”

Experienced Team Transforms Vision to Reality
The BIFROST instrument design is a collaboration between EPFL, the Paul Scherrer Institut (PSI) in Switzerland, Copenhagen University (CPHU), and the Technical University of Denmark (DTU), which will act as the primary partner in the construction of the instrument. Many of the researchers involved have a strong background in triple-axis spectroscopy and share research interests in electronic properties, superconductivity, and magnetism. The longstanding natural links between the collaborators and their institutions have set the scene for BIFROST’s success.

BIFROST overview An overview of the BIFROST sample and detector areas, including the analyser-detector chamber (left); a vertical cut of the secondary spectrometer tank (middle); and a cross-section of one multi-analyser-detector module (right). Image: BIFROST instrument proposal.

The project began with e-mails between Kim Lefmann, a professor in X-ray and neutron science at CPHU’s Niels Bohr Institute (NBI), and Rønnow, a fellow Dane and CPHU alumnus. “When ESS started launching calls for groups to propose instruments, it was then we decided it would be a good idea to build the indirect geometry time-of-flight spectrometer at ESS,” says Rønnow, who is also a former instrument scientist at PSI. The core innovation for this spectrometer is the development of the novel analyser concept, CAMEA—an idea 15 years in the making, and at that point little more than a paper sketch on Rønnow’s desk.

CAMEA, an acronym for Continuous Angle Multiple Energy Analysis, refers to a unique analyser setup: several crystal analyser arcs placed one behind the other to reflect neutrons out of the horizontal plane. Rønnow first came up with the idea in 2000 while working on the IN22 spectrometer at the Institut Laue-Langevin in France. During later work at PSI’s Swiss Spallation Neutron Source, SINQ, Rønnow further developed the CAMEA concept as part of the EIGER spectrometer, though it was not ultimately included. Now, however, CAMEA stands as a new class of analyser that, in addition to its inclusion as a key component for BIFROST, is being integrated as an upgrade to RITA II, a triple-axis spectrometer at SINQ.

BIFROST’s proposers also include instrument scientist Christof Niedermayer, from PSI, and Niels Bech Christensen, a senior scientist from DTU’s Department of Physics. Together with Lefmann and Rønnow, all four have direct hands-on experience in advanced, multiplexed triple-axis spectroscopy from running RITA II. This experience has carried over directly to the BIFROST design.

The Proof is in the Prototype
The project began to find its form through the efforts of Jonas Okkels Birk, a PhD student at NBI and now a post-doc at PSI, who put his thesis project on hold to work on BIFROST. Birk built a prototype of the CAMEA analyser system at DTU in Copenhagen, and later installed and tested it on MARS, a time-of-flight (TOF) backscattering spectrometer at PSI. Another post-doc, Márton Markó, formerly at PSI and now at the Wigner Research Centre in Budapest, had responsibility for running the new setup.

Splitting of the reflected neutrons' signal. A comparison of the simulation data (solid lines) and the prototype test data (crosses) demonstrating how BIFROST will be able to split the signal of reflected neutrons from a single analyser (grey) into three different energies (blue, green and red). Image: BIFROST instrument proposal.

The prototype consisted of three crystal analysers, which the group has coined “prismatic”, because each analyser splits the neutron signal, based on the wavelength of individual neutrons, into three detector tubes. This can be compared to the way a prism divides white light across multiple angles, also based on wavelength. Using data from the nine detector tubes, it was possible to record most of the scattered neutrons with good resolution and a high signal-to-noise ratio without having to discard many of them—the usual approach to tuning resolution on a spectrometer.

“The interesting thing here is that the old calculations implicitly assumed that you just had one big detector. It was never questioned by anyone,” says Lefmann, who supervised Birk at NBI. “So the calculations were completely right, but under this assumption. Then Jonas realised that you could just take this big detector and cut it up into smaller ones, and suddenly you could gain a lot for nothing.”

As the CAMEA prototype tested at PSI subsequently demonstrated, the use of multiple crystal analysers, which tripled the measurable energies in the horizontal plane, also led to a surprising jump in detection efficiency. “When we got the numbers that we sat down and calculated, it was far more in our favour than we thought. I had anticipated that within the plane we would be a factor of three or four better [for neutron count rate relative to comparable instruments under development], but it came up to 22. So we have been undershooting by a factor of six in our estimations,” explains Lefmann.

Says Birk of the prototype test data: “There were a lot of sceptics when I only showed the simulations, but when they saw this data, no sceptics remained. We are physicists, when we see data it can persuade us.” 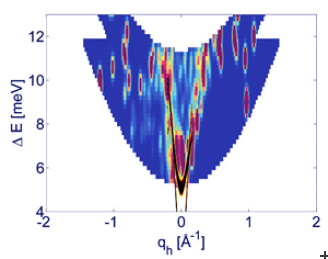 Measurement of YMnO3 A measurement of an actual sample (YMnO3) made on the MARS spectrometer at PSI with the CAMEA prototype installed, together with theoretical predictions of where the signal should be. The results include high noise levels because of limited neutron intensity. This corresponds to less than 1% of what BIFROST at ESS will record in two seconds. Image: Jonas Okkels Birk.

Neutron Spectroscopy at ESS to Become Part of Materials Discovery Process
BIFROST joins two conventional spectroscopy techniques that were previously incompatible, greatly extending the possible scientific applications of the method. By virtue of the unique properties of ESS, BIFROST is able to combine the use of multiplexing crystal analysers that select neutrons by wavelength post-sample (the CAMEA principle), and indirect geometry time-of-flight measurements that identify neutron wavelengths pre-sample. The result is a science case for BIFROST, developed by Paul Freeman (a post-doc at EPFL at the time and now a lecturer at the University of Central Lancashire), that is both exciting and robust.

“By layout, BIFROST is really unique to combine a time-of-flight front end with an angular and energy multiplexed crystal analyser-based back end,” says Arno Hiess, head of the ESS Scientific Activities Division and ESS coordinator for the indirect geometry spectroscopy instrument class. “It’s a perfect match, combining the latest in triple-axis spectroscopy with these multiplexed analysers, and ESS offers the real advantage of a long pulse source.”

Additionally, the significantly elevated neutron brightness expected at ESS relative to existing facilities enables the study of smaller samples with the BIFROST instrument. This advantage expands the potential application of neutron spectroscopy to include preliminary analysis of new materials, such as high-temperature superconductors and quantum magnets.

The discovery of so-called room-temperature, ambient-pressure superconducting materials is the Holy Grail of current materials research. One ambitious research strategy BIFROST will enable is to screen for materials with similar spectroscopic properties in order to identify high-temperature superconductors and close in on new superconducting compositions. Potentially enabling energy transport without losses, such a discovery would, among other things, greatly enhance the efficiency of the power grid, revolutionize personal transportation, and allow for the delivery of sustainable energy produced in one location for use anywhere on the planet.

“The thing is, when you are trying to discover new materials you first start out getting them in very small crystallites,” explains Rønnow. “And the amount of effort required—that goes into trying to get a bigger crystal—takes either months or years, or sometimes you just can’t succeed. By allowing for the routine use of the smaller crystals, BIFROST will make neutron spectroscopy an integral part of the materials discovery cycle.”

The Future of Neutron Spectroscopy with BIFROST