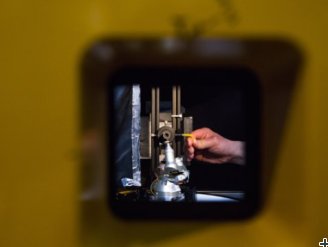 British scientists have elucidated the structure of a vital enzyme with the help of neutrons. This involved the presence of a hydrogen atom. Their results are now published in Nature Communications.

Now scientists around Emma Raven, Peter Moody and Hanna Kwon have determined the structure in the active center of the intermediate state II of an ascorbate peroxidase from the group of heme enzymes among others with the help of neutrons. Professor Moody of the University of Leicester said: “Using beams of neutrons instead of X-rays lets us see the position of hydrogen atoms without altering the chemical state.” At the Heinz Maier-Leibnitz Zentrum, the biochemists used the BioDiff neutron diffractometer to perform initial test measurements on the enzyme. They carried out further measurements at the Institut Laue-Langevin in Grenoble, France. They found that a hydroxyl group (-OH) is bound to the iron atom in the intermediate state II.

As early as 2014, the same group around Raven and Moody had also frozen and examined the heme enzyme cytochrome c-peroxidase in the intermediate state I on the BioDiff instrument. At that time the neutrons had been able to detect an iron-oxygen arrangement (FeO) in the active center for the intermediate state I. Prof. Peter Moody explains: “These enzymes go through two intermediate steps, a couple of years ago we used neutron cryo-crystallography to show the hydrogens in the first step (published in Science), and since then a great deal of work by our team has allowed us find a way to trap the next step. It had been believed that this second step did not hold hydrogen at the reactive centre, however this work clearly shows the hydrogen and so we have to re-think the way the enzyme works.” Professor Raven from the Leicester University added: “The exact nature of these enzyme intermediates has been the subject of a long-standing controversy and conflicting interpretation of indirect evidence. At least we have been able to see these directly, this really is the “holy grail” of heme enzyme research.”

Press release of the Institut Laue-Langevin