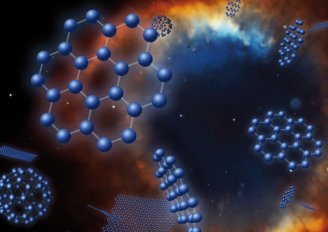 Graphene is known as the world’s thinnest material due to its 2D structure, where each sheet is only one carbon atom thick, allowing each atom to engage in a chemical reaction from two sides. Graphene flakes can have a very large proportion of edge atoms, all of which have a particular chemical reactivity. In addition, chemically active voids created by missing atoms are a surface defect of graphene sheets. These structural defects and edges play a vital role in carbon chemistry and physics, as they alter the chemical reactivity of graphene. In fact, chemical reactions have repeatedly been shown to be favoured at these defect sites1.
Interstellar molecular clouds are predominantly composed of hydrogen in molecular form (H2), but also contain a small percentage of dust particles mostly in the form of carbon nanostructures, called polyaromatic hydrocarbons (PAH). These clouds are often referred to as ‘star nurseries’ as their low temperature and high density allows gravity to locally condense matter in such a way that it initiates H fusion, the nuclear reaction at the heart of each star. Graphene-based materials, prepared from the exfoliation of graphite oxide, are used as a model of interstellar carbon dust as they contain a relatively large amount of atomic defects, either at their edges or on their surface. These defects are thought to sustain the Eley-Rideal chemical reaction, which recombines two H atoms into one H2 molecule.
The observation of interstellar clouds in inhospitable regions of space, including in the direct proximity of giant stars, poses the question of the origin of the stability of hydrogen in the molecular form (H2). This question stands because the clouds are constantly being washed out by intense radiation, hence cracking the hydrogen molecules into atoms. Astrochemists suggest that the chemical mechanism responsible for the recombination of atomic H into molecular H2 is catalysed by carbon flakes in interstellar clouds. Their theories are challenged by the need for a very efficient surface chemistry scenario to explain the observed equilibrium between dissociation and recombination. They had to introduce highly reactive sites into their models so that the capture of an atomic H nearby occurs without fail. These sites, in the form of atomic defects at the surface or edge of the carbon flakes, should be such that the C-H bond formed thereafter allows the H atom to be released easily to recombine with another H atom flying nearby.
A collaboration between the Institut Laue-Langevin (ILL), France, the University of Parma, Italy, and the ISIS Neutron and Muon Source, UK, combined neutron spectroscopy with density functional theory (DFT) molecular dynamics simulations in order to characterise the local environment and vibrations of hydrogen atoms chemically bonded at the surface of substantially defected graphene flakes. Additional analyses were carried out using muon spectroscopy (muSR) and nuclear magnetic resonance (NMR). As availability of the samples is very low, these highly specific techniques were necessary to study the samples; neutron spectroscopy is highly sensitive to hydrogen and allowed accurate data to be gathered at small concentrations.
For the first time ever, this study showed ‘quantum tunnelling’ in these systems, allowing the H atoms bound to C atoms to explore relatively long distances at temperatures as low as those in interstitial clouds. The process involves hydrogen ‘quantum hopping’ from one carbon atom to another in its direct vicinity, tunnelling through energy barriers which could not be overcome given the lack of heat in the interstellar cloud environment. This movement is sustained by the fluctuations of the graphene structure, which bring the H atom into unstable regions and catalyse the recombination process by allowing the release of the chemically bonded H atom. Therefore, it is believed that quantum tunnelling facilitates the reaction for the formation of molecular H2.
ILL scientist and carbon nanostructure specialist, Stéphane Rols says: “The question of how molecular hydrogen forms at the low temperatures in interstellar clouds has always been a driver in astrochemistry research. We’re proud to have combined spectroscopy expertise with the sensitivity of neutrons to identify the intriguing quantum tunnelling phenomenon as a possible mechanism behind the formation of H2; these observations are significant in furthering our understanding of the universe.”