Instruments Full-Steam Ahead at IKON12

IKON12. A record number of participants at the 12th meeting for In-Kind Contributions for Neutron Science at ESS demonstrated the expanding scale and complexity of the instrument projects as they move through preliminary engineering design. 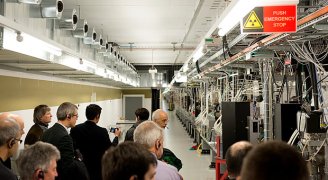 VILLIGEN—The 12th meeting for In-Kind Contributions for Neutron Science at the European Spallation Source (ESS), IKON12, was held February 14-16 at an ESS partner lab, the Paul Scherrer Institute (PSI) in Switzerland. Nearly 200 people participated in the three-day meeting, including scientists and engineers from all 15 instrument teams, many members of ESS staff and management, representatives from more than 30 partner labs, and still others from industry.

In December of last year, the ESS Council approved the revised scope, schedule and budget allocation for the Neutron Scattering Systems (NSS) project. Science Director Andreas Schreyer reviewed the details of this process and its results in his opening day presentation, setting the tone of momentum and urgency that characterised the meeting.

“We’ve got the ’go’ to build 15 instruments, we’ve got the funding and the timeline. So all of the teams know now exactly what they need to do,” said Schreyer. “With all the labs collaborating, it’s mainly a communications issue, and IKON is a fantastic communications platform where the instrument teams can exchange experiences.”

The meeting opened with two back-to-back perspectives, one eyeing the success thus far and another locked on to the challenges ahead. 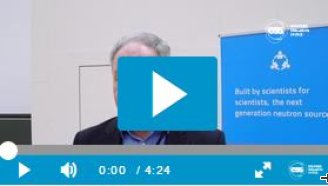 “I’ll admit, in the early days I did not think the in-kind model would get off the ground,” noted PSI’s Christian Rüegg, head of the lab’s Research with Neutrons and Muons division and member of the ESS Instrument Collaboration Board, who opened the meeting. “I wanted ESS to just do it all itself. But here we are and everything is being built in facilities around Europe.” PSI, for its part, is leading one instrument project and making contributions to three others.

Following Rüegg was ESS Director General John Womersley, who outlined the high-level priorities of the project and noted that ESS had recently crossed the 30% completion threshold. Womersley took the opportunity to strongly reinforce a message occasionally obscured in the weeds of such a large and lengthy project:

“Success at ESS will be judged by the ability of the facility to make progress in science areas valuable to society. To deliver on this scale requires European collaboration, the basis upon which ESS can succeed.”

On that note, the large group of scientists and engineers got down to business. 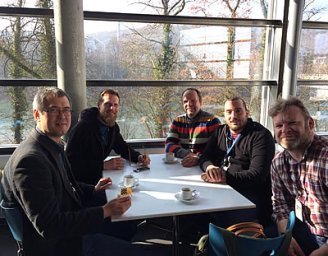 This year’s format allowed for nuts and bolts discussions on technical issues both specific to each instrument and generally across the instrument project. The basis for this discussion was the process and documentation requirements for clearing the rigorous standards of “Tollgate 2”, the preliminary design review. Following this review an instrument team may embark on detailed design and then procurement. Four instrument teams— ESTIA, DREAM, MAGiC and BEER —have now been through Tollgate 2, allowing for a frank lessons-learned approach to the proceedings.

Other sessions included discussions on scheduling, facility infrastructure, safety, control systems, data handling, computer hardware, and early investigations for a common approach to shielding, among others. There were a handful of presentations on the recently updated bunker design, a common interface for all instruments.

The trickiest discussions were on the knowns and unknowns surrounding the construction and installation of the instruments. The constraints on how an instrument may be installed, where, and when, have significant bearing on the machine’s design. These parameters become more and more fixed with each concrete pour out on the construction site, giving some urgency to communications around these issues.

“I think this is the most important slide in all of IKON, but then I’m biased,” declared Iain Sutton during his presentation on installation of neutron beam guides in the Target Station Monolith. Because the Monolith vault will be sealed early in 2019, the guides will be the first technical installation for all 15 of the first wave of instruments. Sutton is the ESS technical coordinator for instrument technologies, and the slide he was referring to read simply: “Instrument installation commencing in 93 weeks.”

This is the deadline for all instrument teams to have their in-Monolith optical components on site, followed by only a two-month window for installation. Given the lead times on production, the implication was that design and procurement of these guides had to be completed as soon as this summer. “Simply put,” said Sutton, “if you aren’t in, you’re out.”

Searching for Economies of Scale

Engineering dominated the IKON12 breakout sessions. One session focussed on the detailed results of individual instrument shielding simulations that together hope to arrive at a partially common solution. ESS Technical Coordinator Masatoshi Arai gave an insightful look back at how this issue was handled during the construction of the spallation source at Japan’s J-PARC facility. 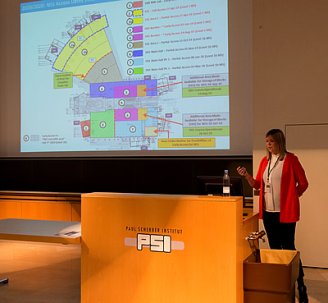 Shielding is a major expense for every instrument team, and the ability to bulk-purchase materials is an important goal. Achieving such an economy of scale through common approaches on a number of different systems was a persistent theme throughout the meeting.

Several presentations on documentation procedures, project planning, communications and the administration of Tollgate 2 served the valuable purpose of showing the instrument teams how they fit into the larger ESS project ecosystem. A key element to this integration is understanding how to use the tools and processes that ESS has established for in-kind collaboration, and a major deliverable for Tollgate 2 is the documentation and scheduling of which in-kind partners will deliver what, and when. 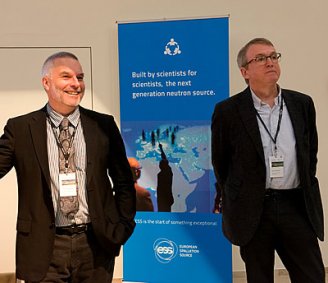 At the traditional IKON dinner, Schreyer took the opportunity to pay tribute to Kurt Clausen, Deputy Director of PSI, who will be retiring this year. Clausen, a Dane, has been a central figure in the European neutron scattering community for several decades and chaired the first “Neutron Roundtable”, a gathering of European lab directors that, among the group’s many other initiatives, served as an early incubator for ESS. “ESS has many reasons to thank you,” concluded Schreyer.

“I can tell you,” said Clausen in response, “that being part of ESS is a great thing because it means that what you are doing can be put into a deeper context, that you can be part of forming the next generation of neutron science.”

The meeting concluded with a unanimous show of support to continue the semi-annual gathering.