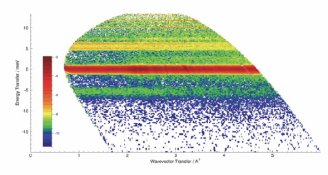 Measurements on the Pelican time-of-flight spectrometer have contributed to a better understanding of the molecular geometry and magnetic properties of a prospective material for quantum computing.

The study, published in Inorganic Chemistry, used a range of experimental techniques and ab Initio calculations to characterise a family of lanthanoid-polyoxometalate single-molecule magnets (Ln-SMMs).

“It is the biggest, most comprehensive, combined study of these interesting molecules using excellent samples, good quality measurements and outstanding simulations,” said Pelican instrument scientist Dr Richard Mole, who with co-author Dr Dehong Yu is based at the Australian Centre for Neutron Scattering.

The investigation was led by chemist Associate Professor Colette Boskovic and dr Alessandro Soncini from the University of Melbourne, including lead author Michele Vonci, who completed some of his PhD research at ANSTO.

“Inelastic neutron scattering is a very effective way to see very weak excitations because you are probing what the individual ions are doing, in contrast to magnetic susceptibility measurements which determine so-called bulk properties,” said Mole.

In the Ln-SMMs, a lanthanoid ion sits in the middle of a cluster of tungsten and oxygen anions, surrounded by a network of water coordinated sodium cations.

Although neutron scattering has been used to study the SMMs, there have only been a handful of papers on single ion lanthanoid SMMs.
“Unlike conventional bulk magnets, in which there is collective long range ordering of magnetic moments, every metal atom knows where its neighbours are and they all line up, the SMMs rely on a pure quantum effect,“ said Mole.

The lowest lying energy levels in the geometric structure of the lanthanoid ions binding with polyoxometalate ligands are dominated by crystal field splitting of the f-orbitals.

The crystal field splitting can result in a slow relaxation of magnetisation, even at relatively high temperature.

The quantum tunnelling of a particle’s spin through a potential energy barrier from one orientation to another (reversing direction) was first observed in lanthanoid single molecule magnets in 2003.

Since then much a larger body of research has focused on how the quantum nature of this ground state of these Ln-SMM’s can be used as qubits in quantum computers.

Building on earlier research
Mole and Yu and collaborators were building on previous research (published in Chemical Communications in December 2015) that elucidated the sensitivity of the electronic structure of the ground and excited states of a terbium analogue to small structural distortions from axial symmetry.

In the first magnetisation study on Pelican, the researchers discovered a polymorphism, in which the same molecule has a different crystal structure, in the terbium analog.

They found the polymorphism when trying to resolve a discrepancy in the neutron data, which observed four well resolved peaks (transitions) instead of the predicted two peaks.

“One possible explanation was the presence of multiple species in the sample,” said Mole.

Calculations and X-ray diffraction data enabled them to determine that the INS spectra had captured two distinct co-crystallised polymorphic phases.
After synthesising the samples separately and repeating the INS measurements, they confirmed the ground state transitions for each phase and energy shifts.

Minute differences in crystal structure, like one or two degrees in the torsion angle, give a 1 meV difference in energy.

“A 1 meV in energy is equivalent about 10 K in temperature, which is significant when you think about operating temperature and power requirements for quantum computers,” said Mole.

Understanding the interaction, that such a small change in coordination geometry can have on electronic structure, was important and led the group to a more comprehensive further investigation of the Ln-SMMs.

“This is a huge project which involved the synthesis and characterisation of neodymium, dysprosium, holmium, and terbium analogues,” said Mole.

There have been relatively few neutron scattering measurements of the lanthanoid-polyoxotungstates, because they absorb neutrons to a greater or lesser degree and are also very difficult to make in pure forms.

“Nonetheless we were able to get a signal from all the compounds except the dysprosium, which has an extremely high absorption of neutrons,” said Mole.

The work on single molecule magnets will continue with the awarding of an Australian Research Council Discovery project grant late in 2017 to A/Prof Boskovic from the University Melbourne and a team which includes Dr Mole.