One of the world’s largest producers of surfactants considers the time spent at ILL using neutrons, through SINE2020, invaluable for its R&D activities. 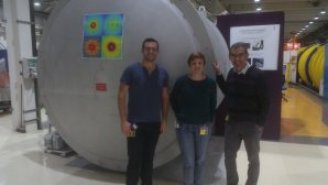 Stepan is one of the world’s largest producers of surfactants, with more than 1800 employees and 16 manufacturing locations worldwide. Stepan provides surfactants expertise for commercial and industrial applications – ranging from foaming agents for shampoo to emulsifiers for agricultural insecticides or agents for oil recovery.

In its quest for formulations tailored to customer requirements, the company needed to validate hypotheses developed on the microstructure of surfactants. Their questions could not all be answered using standard techniques.

Stepan’s chemists therefore decided to use small-angle neutron scattering (SANS) on an instrument at the Institut Laue-Langevin (ILL) in France. SANS can reveal the average size and distribution of particles. It also provides information on shape and chemical structure (from about 1 nm to 1 μm).

The benefits of using neutrons through SINE2020

“The SANS measurements gave us indications on the self-assembly structure of our surfactants. We were able to distinguish between different structures, findings which challenged our knowledge to date. The time spent with the ILL scientist was invaluable.

Without the SINE2020 programme, we would probably not have approached the ILL for experiments, not being aware of the technique.”

A Pipid micelle The surfactant molecule has a hydrophilic head (in red) and a hydrophobic (lipophilic) tail (in blue). When surfactants are added to water, they selfassemble in spheres called “micelles”. © Guillaume Paumier / Wikimedia Commons, CC-by-3.0

Would you like to use neutrons for advanced characterization of your material or component, for free? You’re still in time!

The goal of the project is to offer a total of *40 feasibility studies per yea*r (until September 2019). Applications are being accepted and will be reviewed continuously. The decision on the feasibility and the appropriate facility to conduct measurements will be announced no later than one month after receiving your request.

Join Europe’s companies in benefiting from the information neutrons can provide you!

To apply for free test measurements please fill in the form on our website .