A letter published in Physical Review Letters, by a group of scientists of the Atominstitut – Institute of Atomic & Subatomic Physics of TU Wien (Austria), after an experiment on S18 at ILL. 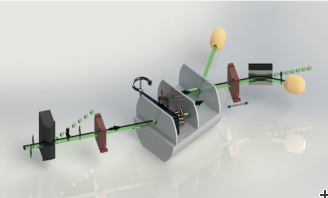 Nuclear spin tomography is an application in (human) medicine most people know either from hospitals or medical drama television series. Here, the patient absorbs and re-emits electromagnetic radiation in all directions in space, that are later detected and from which 3D images (or 2D slice images) can be reconstructed. If we now switch from the medical examination room to the fundamental science laboratory, by replacing the patient by a quantum object and the electromagnetic radiation by a quantum measurement, we can investigate quantum state tomography – the basic principle is quite similar as we will see.

Consequently, in 2011 a novel, more direct tomographical method was established that makes it possible to determine the quantum state without the need for post-processing. However, the new method had a major drawback: it uses minimally disturbing measurements, so called weak measurements, to determine the system’s quantum state. The basic idea behind weak measurements is to gain very little information about the observed system, by keeping the disturbance on it, caused by the measurement process, (negligibly) small. Usually a measurement has a huge impact on a quantum system, cause typical quantum phenomena like entanglement or interference to vanish irretrievably. Since the amount of information that is gained in this procedure is very small, the measurements have to be repeated many times – a huge disadvantage of this measurement procedure in practical applications.

We have recently managed to combine the original and new methods, retaining the benefits of both of them. We were able to further develop the method established in 2011 in such way that the need of weak measurements becomes obsolete, allowing the so-called strong measurements so be integrated in the direct measurement procedure of the quantum state. This made it possible to determine the quantum state with higher precision and accuracy in a much shorter time, compared to the approach with weak measurements – a tremendous progress. These results have now been published in the journal “Physical Review Letters”.

We performed an experimental test of our new scheme in a neutron interferometric experiment. Neutron interferometry was first successfully performed in 1974 at the Atominstitut, after years of development. It is based on the wave nature of neutrons, which are massive nuclear particles that form up almost two thirds of our universe. Nevertheless, if the are isolated from the atomic nucleus, for example in the fission process of a research reactor, they can behave like waves. This phenomenon is usually refereed the as wave-particle duality, which is explained in the framework of quantum mechanics. Inside the interferometer, the incident beam is split into two separate beams (by a thin silicon perfect crystal plate). The beams travel along different regions in space and at some point the beams are brought together again and allowed to interfere. The experiment was done at the neutron source at the Institut Laue-Langevin (ILL) in Grenoble, where our group operates a beam line.

It is important to note that our results are not limited to the quantum system formed by single neutrons, but are in fact completely general. Therefore, they can be applied to many other quantum systems such as photons, trapped ions or superconducting qubits. Our results will impact on how quantum state estimation is performed in the future and how they will be exploited in rapidly evolving technologies in quantum information science.