The proton accelerator at the Paul Scherrer Institute: forty years of top-flight research

Press release from the Paul Scherrer Institute
By Paul Piwnicki, 24/02/2014

Materials research, particle physics, molecular biology, archaeology – for the last forty years, the Paul Scherrer Institute’s large-scale proton accelerator has made top-flight research possible in a number of different fields. Initially, it was supposed to help clarify issues in particle physics by producing pions. Later, the facilities around the accelerator were expanded so that its proton beam could also be used to generate neutrons and muons for a wide range of experiments – frequently in research fields that nobody had even considered during the construction of the plant. Today, about twenty experiments can take place simultaneously here, many of which are conducted by external researchers who are looking to use the partly unique research possibilities. The results often attract interest worldwide. The constant refinement of the accelerator was crucial for the expansion of the facilities, enabling the proton current to be increased twenty-four-fold over the four decades. The PSI’s large proton accelerator currently delivers the most powerful proton beam in the world. The experience that the researchers and engineers at the PSI have gained at the facility also formed the basis for the development of proton therapy, which has already been used to treat several thousand cancer patients successfully at the PSI. 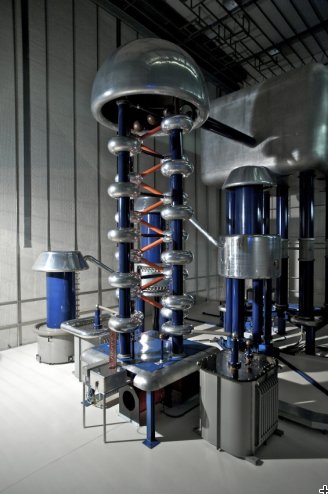 A superconductive state produced via a strong magnetic field, new materials that might be able to pave the way towards sodium-ion batteries, glimpses into the work methods of Bronze-Age craftsmen, new proton radius measurements and tests of the standard model of elementary particle physics – just five examples from more than 100 research results that were published in 2013 alone and achieved at the PSI with the aid of neutrons or muons.

They were all made possible by the Paul Scherrer Institute’s large proton accelerator. For the last forty years, it has consistently been providing a proton beam that is used to generate the particles necessary for the experiments. The proton beam initially hits two carbon targets, producing pions and muons for solid-state research and particle physics before continuing on its path towards the lead target of the neutron source SINQ, where it releases neutrons for studies in materials research, molecular biology or even archaeology. For a fraction of the time, the full beam can also be directed towards a second lead target to generate particularly slow, “ultra-cold” neutrons, upon which the properties of neutrons themselves can be studied. Different experiments, some of which are only possible at the PSI, can be conducted simultaneously around the proton beam at about twenty measuring stations. For instance, only here can so many muons be generated that the search for particular rare muon decays can actually produce results within a human lifetime. And only here one can work with muons that are slow enough to be able to study thin layers of material with them. 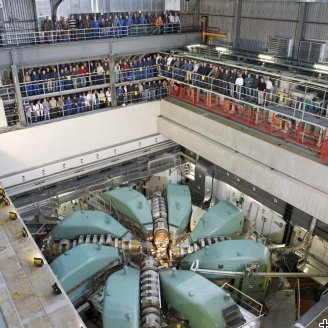 The PSI’s large proton accelerator The photograph was taken in 2010 when the roof shielding had completely been removed. Members of staff working at the facility are visible in the gallery. (Photo: Paul Scherrer Institute/Markus Fischer)

The centrepiece: the accelerator itself

Although the proton accelerator itself is mostly overshadowed by the research it makes possible, it is actually a technical masterpiece and research project in itself: only thanks to novel ideas is the constant improvement of the accelerator possible. Even the basic design was innovative: the accelerator was constructed as a cyclotron with a magnetic field that is generated by eight completely separate dipole magnets. Four efficient cavities were installed between the magnets, in which a strong alternating electric field accelerates the protons in large energy stages. The centrifugal force keeps pushing the protons further outwards, which work their way to the edge of the accelerator on a spiral path. Once there, they have reached their end energy of 590 MeV and can be extracted and directed towards the targets. Since the facility’s launch, the initial proton current of 100 μA has been increased to a previously inconceivable 2.4 mA – a boost that benefits all experiments. Martin Humbel, who has known the accelerator since its very beginnings, cites a few examples of improvements that have been made: “In the early days, the fields in the cavities were varied in a sinus shape. 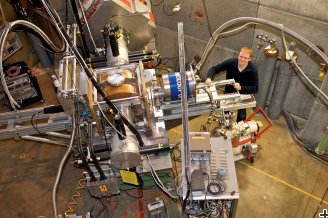 The protons could only be accelerated near the temporal field maximum, which meant that only around 4 per cent of the protons arriving from the pre-accelerator could be used without activating the exit region to an impermissible extent. When another cavity with three times the frequency was added, a plateau formed in the temporal field structure, which enabled around 15 per cent of the protons to be accelerated. During the last major modification in 2008, the last two cavities were replaced. The new ones generate stronger fields, which means that the protons require fewer laps to attain their end energy. As a result, the neighbouring proton paths are further away from each other, which enabled the proton beam strength to be doubled again.” However, the current available at the end does not only depend on the possibilities of accelerating the protons. “In the case of the cyclotron, the beam-current-limiting factor is the activation of the extraction region. This means that if the proportion of the protons that are lost during the extraction process is reduced, you can increase the current,” stresses Humbel. “Thanks to improvements to the facility, we have managed to make it run extremely “cleanly” so that 99.99 per cent of the protons accelerated are actually extracted.” 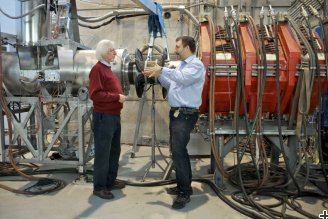 PSI PSI researchers Peter-Raymond Kettle (left) and Stefan Ritt at the beamline, through which the muons reach the MEG experiment, where the extremely rare decay of the muon is supposed to be detected in a positron and a photon. (Photo: Paul Scherrer Institute/Markus Fischer)

Where it all started: research with pions

The proton accelerator was built for “intermediate energy physics”, particle physics where primarily the interaction of pions with protons and neutrons was studied and which scientists hoped would help us to understand the strong nuclear interaction. “Although this came to nothing, the experiments yielded many accurate results that are still valid to this day,” stresses Klaus Kirch, Head of the PSI’s Laboratory for Particle Physics and a professor at ETH Zurich.

A glimpse inside materials with muons

Already before the facility was launched, however, researchers had contemplated experiments for solid-state physics. In 1971, for instance, the feasibility of studying materials with muons on the accelerator was already discussed at a conference. It was known that the polarised muons formed during pion decays were suitable for use as microscopic probes for investigations in solid-state physics and corresponding experiments were also conducted at CERN. The first experiments were carried out at the present-day PSI using the muon-spin-rotation method in 1975 and the first publication appeared the following year. “For a long time, solid-state researchers shared the measuring stations with particle physicists. It wasn’t until the early 1990s that the first fixed measuring station was established after the user service was introduced at the muon source, now called SμS, in 1989,” recalls Elvezio Morenzoni, the current head of the Laboratory for Muon Spin Spectroscopy at the PSI and a professor at the University of Zurich. Meanwhile, there are six permanent measuring stations for muon experiments, which are in high demand among researchers from all over the world. After all, there are only a handful of places worldwide that can offer muons for solid-state research. And slow muons, which can be used to study the individual layers of thin-film systems, only exist at the PSI.

From superconductors to old swords – neutrons at the PSI 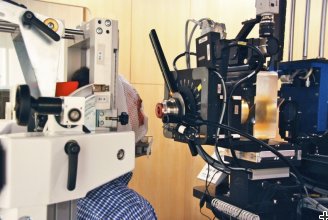 The possibility of using the protons from the accelerator to generate neutrons was already considered early on. Although the idea was initially rejected as the proton current would not have sufficed to produce a sufficient neutron flux, it was soon revisited. “Firstly, the accelerator experts demonstrated that the proton current could be increased tenfold. Secondly, a decision was made to close down the reactors where neutron research had been conducted until then. At the same time, it was clear that the Swiss researchers couldn’t do without their own neutron source,” says Albert Furrer, former head of the Laboratory for Neutron Scattering at the PSI and one of the initiators of the neutron source. In 1996 the PSI’s spallation neutron source SINQ was launched. The protons from the large particle accelerator hit a lead target and knock the neutrons out of the lead nuclei, which are then available for experiments. From the outset, neutrons are produced in two wavelength ranges: thermal neutrons with short wavelengths, which are especially used in structure determination, and cold neutrons, which are slowed down beforehand in liquid deuterium. These are particularly useful for studying materials and biological samples. Today, SINQ is an established neutron source with thirteen instruments, where over 400 experiments are conducted every year. Scattering experiments display structures and movement inside high-temperature superconductors, magnetic materials or biological substances; imaging experiments produce pictures of the interior of a wide variety of objects – from combustion engines to archaeological objects.

Particle physics beyond the giant accelerators

When we hear the words “particle physics experiments”, we mostly think of giant accelerators like the LHC at CERN these days. However, the PSI’s proton accelerator also makes it possible for relevant particle physics to be conducted here that complements the research at CERN. While the particles at CERN are supposed to collide at particular high energies, the advantage here is that an especially large number of particles are available, which is important in the search for the extremely rare muon decay in a positron and a photon (MEG experiment) as you need to observe a great many muons decaying to have even a slim chance of seeing such a decay. The fact that the decay has not yet been observed sets a maximum value for the probability of the decay and thus rules out certain alternative versions of the standard model. “With the success of the MEG collaboration, all the current record limits on rare muon decays presently stem from experiments conducted at the PSI,” stresses Kirch. “And we are trying to improve the muon intensities at the PSI even further.” Another spectacular experiment is the measurement of the proton radius, which involves replacing the electron in hydrogen atoms with a muon and measuring the energy level of the muonic hydrogen with the aid of a laser – and all in the muon’s brief lifespan. Due to the muon’s larger mass, its energy levels are especially sensitive to the size of the proton.

In mid-2011, the PSI’s ultra-cold neutron source went into operation. It has its own target, similar to SINQ’s, out of which the proton beam knocks neutrons. Great pains are then taken to slow the neutrons down until they are “ultra-cold” so that the properties of the neutron itself can be studied. First of all, scientists are looking to clarify whether the neutron has an electric dipole moment – a question that is important if we want to understand why there is more matter in space than antimatter.

Healing from the accelerator

The accelerator facility is not solely used for research, however: since 1984 patients suffering from certain strains of cancer have also been treated with the proton beam. Initially, this beam came from a pre-accelerator of the large proton accelerator or the large accelerator itself depending on the kind of treatment. Today, the therapy has its own accelerator and three treatment positions – all thanks to the accelerator expertise of the PSI staff.