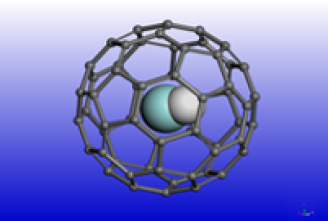 Fullerenes, discovered in 1985, are spheroidal carbon molecules with a unique hollow cage structure. Together with capabilities regarding derivatisation, the process in which a chemical compound is transformed into another compound with a similar chemical structure, this means they can, for example, be used as a therapeutic or diagnostic agent, with applications in medical resonance and X-ray imaging.
The C60 ‘Buckminsterfullerene’, or ‘Bucky ball’, the most symmetrical molecule to exist, is particularly appealing. The cavity of this fullerene is coined as a ‘nanolaboratory’ due to its size of approximately one nanometre and its laboratory-like controlled environment. Whilst molecules are usually observed interacting with their neighbours, this nanolaboratory allows molecules to be isolated and observed under carefully controlled conditions.
Molecular surgery has allowed a major breakthrough in the permanent encapsulation of small molecules such as H2, H2O, NH3 and CH4 and now HF in the C60 fullerene. A recent collaboration between the Institut Laue-Langevin (ILL), France, the University of Southampton, UK, the University of Nottingham, UK, and the National Institute of Chemical Physics and Biophysics (NICPB), Estonia, has exploited these new possibilities to form and study the HF@C60 endofullerene for the first time.
Initially, by grafting small molecules, a hole was made in the C60 fullerene cage, through which the HF molecule was pushed at high pressure and temperature into the cavity. In order to reform the C60 with the single HF molecule stabilised inside, the cage was sealed using a molecular suturing technique.
Scientists used inelastic neutron scattering, infra-red and solid-state nuclear magnetic resonance spectroscopy to characterise the quantum mechanics of the encapsulated HF molecule, which moves freely in the cavity. This study is part of a programme to investigate small molecular rotors, under well-defined conditions, which create completely polarised nuclear magnetic states as a direct result of quantum mechanics. Such magnetic states can be used to increase the sensitivity of NMR by a factor of 100. Through derivatisation of the endofullerene, it can potentially be delivered to sites of interest, for example in the human body, where the hyper-polarisation can be exploited in NMR-based measurements.
ILL’s Head of Science and UK Associate Director, Mark Johnson, says: “Neutron scattering provides the most complete description of the quantum mechanics of small molecules encapsulated in C60. Exploiting the resulting hyper-polarised states requires detailed knowledge from studying a set of molecules which are perfectly screened by the C60 cage (e.g. H2) or less well so in the case of polar molecules like H2O and HF.”