The hour of birth of the German neutron research:

The Atomic Egg, the first German research reactor, started operating 60 years ago in Garching. Thereby, irreplaceable insights into matter were made possible.

On October 31, 1957, the Munich research reactor FRM went online for the first time. Until 2000, the “Atomic Egg” of the Technical University of Munich (TUM) was a reliable provider of neutrons for basic research and medical applications. This year the facility is celebrating its 60th birthday with a special exhibition.

The planning and construction of the research reactor fell into the time of German reconstruction. It took just over one year from the time of the purchase resolution by the Bavarian Council of Ministers (July 6, 1956), to the start of construction work on the reactor (November 6, 1956) and the first produced neutrons on October 31, 1957. At the time, Bavaria edged ahead of Dresden in the competition to bring the first reactor into operation. Because of its egg-shaped dome, designed by the architect Gerhard Weber, the FRM was soon known simply as the Atomic Egg.

From cabbage farmland to a renowned research center

In the context of the United States’ program “Atoms for Peace,” Professor Heinz Maier-Leibnitz bought the reactor on behalf of the Bavarian state government. Maier-Leibnitz developed the Atomic Egg as a research institute with world-wide recognition that would soon operate on an equal footing with leading American researchers. From its inception, the Garching Atomic Egg has served basic research in physics and chemistry. The scientists developed technologies and standards that were later adopted at other research reactors: Neutron guides, for example, were invented at the Atomic Egg, as was backscattering spectrometry. Even the safety standards that the Garching operators developed in lieu of statutory provisions served as a reference for other reactors and later found their way into generally accepted rules. In addition to basic research, Prof. Maier-Leibnitz cared deeply about educating next-generation nuclear technology and science researchers who were in demand not only in Germany, but around the world. Maier-Leibnitz’s reputation, and ultimately the Nobel Prize for his student Dr. Rudolph Mößbauer, attracted numerous renowned physicists to Garching as guest professors. The Atomic Egg in the cabbage fields of Garching thus became the germ seed of a scientific campus that, today, is second to none in Europe. 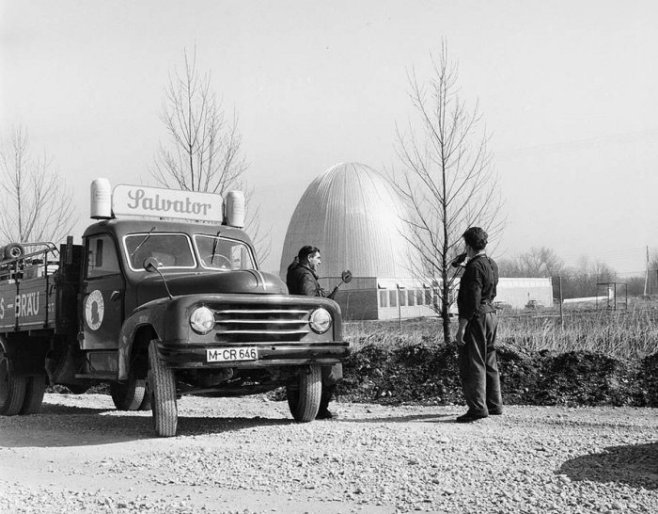 The world in atomic fever

On the other hand, in many industrialized countries, there was an atomic euphoria that, in retrospect, seems strangely escapist. Perhaps because of the nuclear horrors many politicians and researchers at that time had the hope to harness these incredible nuclear forces for the benefit of humanity. US President Dwight D. Eisenhower announced in a surprise speech to the United Nations General Assembly on December 8, 1953, the “Atoms for Peace” program. He thus offered foreign states access to nuclear technology for civilian use. Strategic wise, the supply of enriched uranium allowed for political influence and some control over the fact that these countries did not carry out military programs. In addition, it secured export earnings.

In Germany, however, the hope grew to get rid of the role as a pariah of the international community and to push forward into a new industrial age with the help of nuclear technology. The immense expectations of nuclear energy can be seen from the statements of the CSU politician Franz Josef Strauss, who became Minister of the “Federal Ministry of Nuclear Affairs” set up at the end of 1955. Strauss considered the use of atomic energy to be an equally important cut in human history as the “invention of fire for the primitive man”. The SPD did not want to queue and in 1956 introduced a “nuclear plan”. At that time, some nuclear experts expected that in 25 years, every second West German worker would have anything to do with nuclear energy.

After Federal Chancellor Adenauer had made soundings and the German scientists gradually gained confidence in their American counterparts, the US finally agreed to supply research reactors. The main location of a large nuclear research center was initially unclear. Munich and Karlsruhe, two centers of excellence in nuclear research, were both in the race. Strategic considerations on the part of NATO finally gave Karlsruhe the nod

The performance of the atomic egg was increased twice: from initially one megawatt heat to 2.5 megawatts in 1966 and then finally to 4 megawatts in 1968. However, in the 1980s the neutron density was no longer competitive internationally, which is why the scientists began planning a new research neutron source. The neutron source known as FRM II was designed to deliver a 100-fold higher neutron flux. On July 28, 2000, after approval was granted for FRM II, the Atomic Egg was shut down. It had produced neutrons for 43 years without failure and enabled tens of thousands of projects. The shell of the Atomic Egg, which is also found in the Garching city crest, is a listed historical structure. Work to gut and dismantle the interior has been in progress since 2014 to make the hall available for science and operation of FRM II in the future. A photo exhibition showcasing “60 Years of Neutron Research,” including a walk-in wooden model of the Atomic Egg, will be on display in the Museum Reich der Kristalle (Theresienstr. 41 in Munich) from November 6 to December 3, 2017.